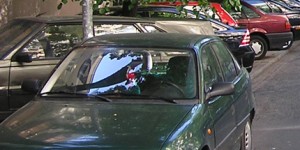 Bath Borough Council on Monday had a long discussion over proposed parking regulations, where there should be parking and where it will be restricted, and on one side or the other of certain downtown streets. It is intended to make it easier to park making it better for business.

Solicitor Blake Marles will draft the ordinance and it will be advertised so people know what is ahead.

Council also has a proposed parking lot ordinance, and Borough Manager Tom Petrucci will prepare those words for advertising.

Another discussion was what to do with a propery the borough owns at 224 W. Main Street. Proposals that came up were to demolish it for open space and combine that with a walking trail; clean up the building and convert it into a visitors center; or just tear it down for a parking lot (which would also need landscaping to suit the Pa. Dept. of Environmental Resources, who would provide a $46,000 matching grant.)  Councilman Mike Reph said the building was originally purchased to tie in with a Rails-to-Trails project that would include an area where once was a railroad bridge.

• Jeff Buffington of Old Forge Drive complained of urine odors from a neighbor’s home where there are three cats and five dogs that the elderly residents have in the house. Petrucci, zoning officer Dennis Huth and Colonial Regional Police responded to the problem, but Petrucci said there is nothing in a local ordinance that deals with smells from a home. Council president Robert Fields said a state health inspector could deal with the problem.

• Jim Morgan of 208 S. Walnut St. told Council he wants to put siding on his home, but was told it is in an historic district. He said that paperwork in meeting with the Historic Architectural Review Board to get approval would delay the project. He said he and his wife have saved up in order to afford putting white siding and blue shutters on the home to restore it to its former beauty. Council voted to approve the work now.

• Clark Smith questioned about the 241 E. Main St. property that is on hold by a bank. He said he has a water problem from drainage off the neighbor’s property. He showed Council a 5-year agreement made between the former swimming pool business and Council. Kearns suggested the borough engineer make an inspection. Petrucci will also check on the escrow account for the property. Smith talked about the sign that the business has, and a hole from a cesspool. Fields told him if there is a new owner, he would have to go through the legal processes.

• A preliminary 2013 budget was worked on last week, and scanned on Monday, but will be given further review.

• Leaf collections will begin in mid-October and go to November or December. . .Also noted: There is  a good supply of salt on hand to deal with snow and ice this winter.

• Kearns reminded about Bath Community Day this Saturday, Oct. 6 from 11 a.m  to 4 p.m. at Keystone Park. The new gazebo will be dedicated, and music will be a part of it.

• Lehigh Valley Economic Development Corp. wants a list of properties that could be used for development, so that they could showcase them to bring in business for Bath.