This week we will look at Softball, Baseball, Tennis And Lacrosse!!

The Nazareth girls softball team is currently 8-5 On Tuesday April 16 Freedom came to the Nazareth area where Nazareth suffered a 8-4 lost.  On Friday April 22 The boys traveled to Bethlehem Catholic and suffered a 9-0 lost.  After a weekend off, they got back at it on Monday April 22 When Allen came to town and Nazareth won 12-1.  Today at 4pm and on Saturday April 27 they will host Stroudsburg at 11am in which is community day where Special fundraisers will be held. All proceeds will benefit The Miracle League of Northampton County. Any additional donations will be accepted that day and forwarded to the Miracle League. Checks made payable to Nazareth Softball Booster Club (NSBC) and earmarked The Miracle League are deductible for income tax purposes. Contact Lenore Hudak, NSBC President, at 610-217-3465 with any questions. Visit MiracleLeagueofNC.org for more information.  On Tuesday April 30 they host Easton at 4pm!!

The Nazareth Baseball Team is 5-8.  On Tuesday April 16 Freedom came to the Boro Park where Nazareth got a 1-0 win.  On Friday April 22 The Boys traveled to Bethlehem Catholic and suffered a 7-3 lost.  After a weekend off, they got back at it on Monday April 22 When Allen came to town and Nazareth won 6-3.  On Wednesday April 24 they will be at Central Catholic and then at Liberty High School at 4pm Friday April 26 and on Saturday April 27 they will host Stroudsburg at 11am.  On Tuesday April 30 they host Easton at 4pm where I (Myself) will be throwing the 1st pitch!!

The Nazareth Girls Lacrosse Team is 8-4 as of April 23. On Tuesday April 16 the Girls were ar Freedom where they got a 23-7 win! On Thursday April 18 they had Parkland at home and got a 14-13 Overtime win over Parkland! On Saturday April 20 the Girls traveled to Saucon Valley where they pulled out a 14-7 win!  On Monday April 22 they were at Emmaus where they lost 11-7.  On Wednesday April 24 they will host Lberty at 7:30pm!!

Also, a little note here, You should all attend the Spring Musical that Nazareth High School is holding, ”Anything Goes” this will be the 2nd weekend of it! It will be at 7:30pm Friday night and 7:30pm Saturday night and at 2:00pm on Sunday Afternoon!!

Also, I Have a website that dedicated to every single Nazareth Sport Team, please ignore that it it says nazareth football in the URL Box, it really for all sports, trying to change that! The address is: http://nazarethfootball.tripod.com and Nazareth Football has their own at http://www.nazarethfootball.com as Michelle Sandone is the new Football Booster Club President!

See you next week! 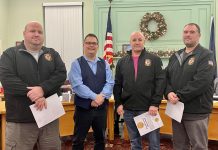