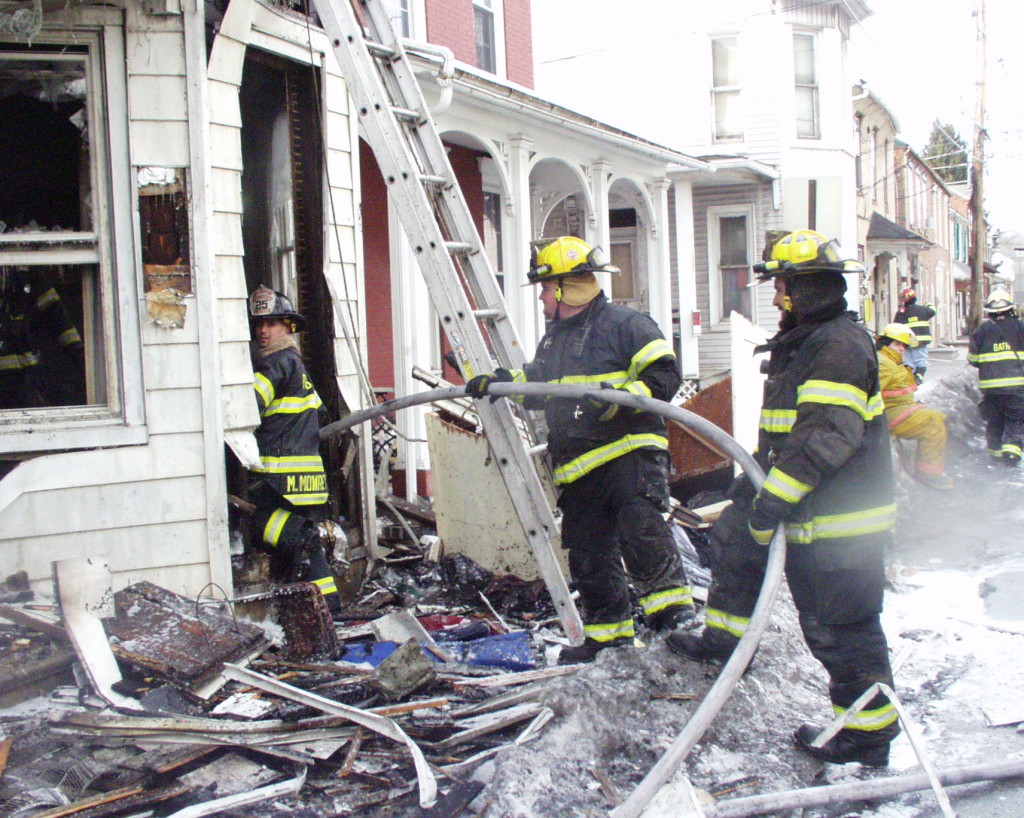 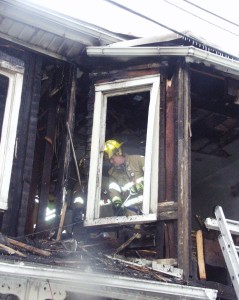 A fire ripped through a Bath home Monday morning. One man sustained injuries and was hospitalized. The fire brought responses from 12 area fire companies.

First on the scene of the fire in the 100 block of S. Chestnut Street were the Bath Firefighters, Klecknersville Rangers of Moore Township, and East Allen Township Vol. Fire Co.

Bath firefighters were led by Assistant Fire Chief, John Albrecht. Sharon Piecienski owns the home; her son was the one injured in the blaze. He and his two dogs were rescued. He was taken to Lehigh Valley Hospital-Cedar Crest. His children were in school at the time.

All homes within a two-block radius were evacuated, as there were fears of an explosion from a natural gas line. Because of how close neighboring homes were to the fire scene, there was some concern about the fire spreading. The fire was next door to the Red Wolf Bar and Grille, the former Bath Hotel, which also had a fire several years ago.

Because of nearby power lines that were hampering firefighter’s efforts to use a tower truck, Met-Ed shut off electricity in the area. Traffic was detoured all day and barricades were put up at W. Northampton Street, S. Chestnut Street, and West Main Street. 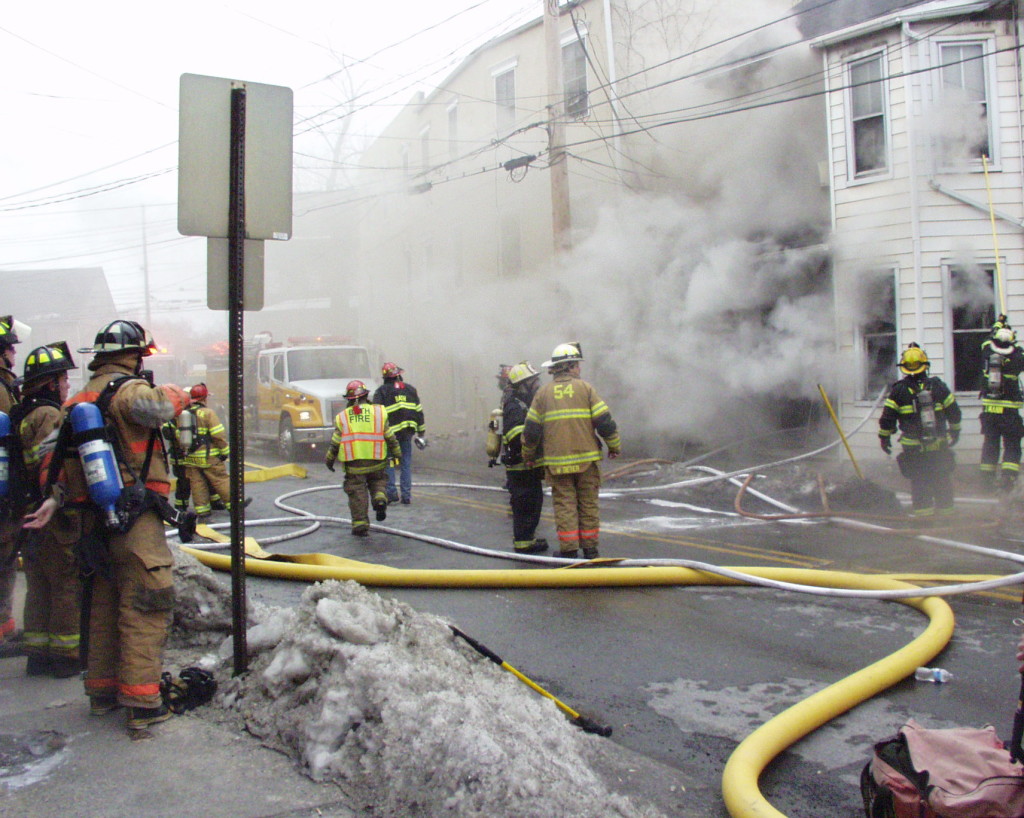 Grey smoke was billowing from the home shortly after 9:30 a.m., but no flames were visible. The smoke was so thick that the firemen used more than a dozen oxygen tanks. Used tanks were piled up in Helfferich Alley.

The fire was declared out by the early afternoon and all displaced residents were able to return home. George Wolf Elementary School was used as a temporary shelter for them. Firemen continued to wet down the interior of the burned structure for any hot spots.

In addition to the fire companies noted above, others who had fire units on the scene were from Hecktown, Hanover Twsp. Northampton County, Allen Township, Plainfield Township, Bushkill Township, Nazareth, Lehigh Township, Forks Township, and Nancy Run near Easton.

In addition to the firefighters, Colonial Regional Police had several policemen there, urging people to keep their distance because of the possible explosion. Chief Roy Seiple was there with his fellow officers. Bath Firefighters and East Allen Twsp. Ambulance Corps had ambulances there for any possible injuries.

Goodwill Fire Co. brought food and refreshments for the firefighters.

Called suspicious, the fire remains under investigation, but is believed to have started in the basement. 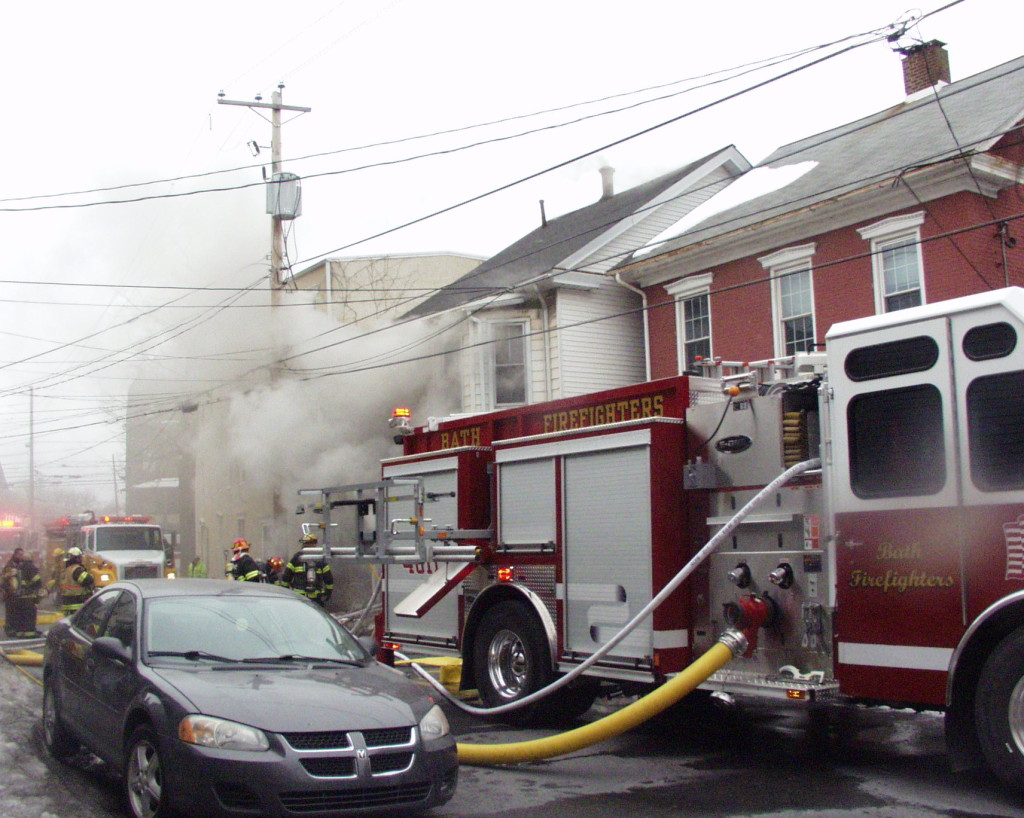 White smoke was billowing out of the burning S. Chestnut St. home in Bath as firefighters worked at controlling the blaze and keeping it away from as adjoining home and the Red Wolf hotel on either side of the structure.
—Home News photo