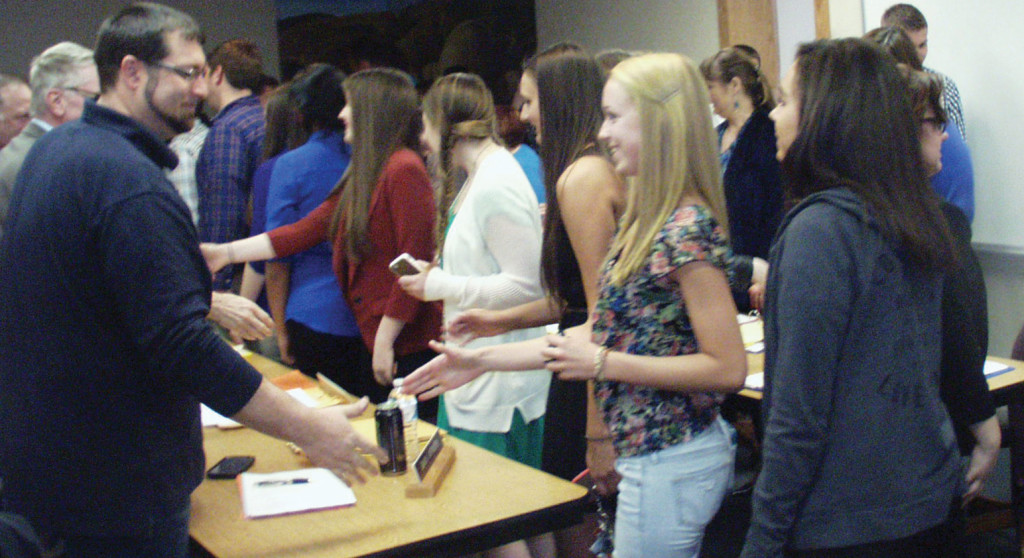 The students who participated in State DECA competition came to the meeting of the Northampton Area School Board on Monday. They literally filled the meeting room and winners of the state competition were shown on slides and then had remarks about their projects that made them winners. Among the many projects: Creative Marketing, Merchandising Operations, Finance Operation Research, Advertising Campaign, Entrepreneur Innovation, and Modeling.

DECA (Distributive Education Clubs of America) is directed in Northampton by Ms. Tara Mrazik and she accompanied them to the meeting. Before each of the students shook hands with the school directors, Supt. Joseph Kovalchik commended Ms. Mrazik for putting in 24/7 of her time to the program and the students. He remarked that they raised $30,000 for their trip to the national DECA competition in Atlanta, Georgia this Friday.

In another presentation on Monday, Ms. Patricia Jones and Ms. Erin Miller talked about Crossing the Curriculum with English and Art.

Under personnel, the board took these actions:

The board awarded the bids of $74,230 for a used 2011 Crawler 60 to CSI Material Handling of Bethlehem, including delivery, training and one year warranty.

Also approved: An agreement with Capital Area Intermediate Unit 15 to provide off-site backup and disaster recovery services at $3,600 a year for three years; and a three-year service agreement with Physio-Control, Mid-Atlantic District, to provide inspections, reports and replacement batteries and electrodes as needed for NASD’s 18 defibrillators at an annual cost of $6,141.