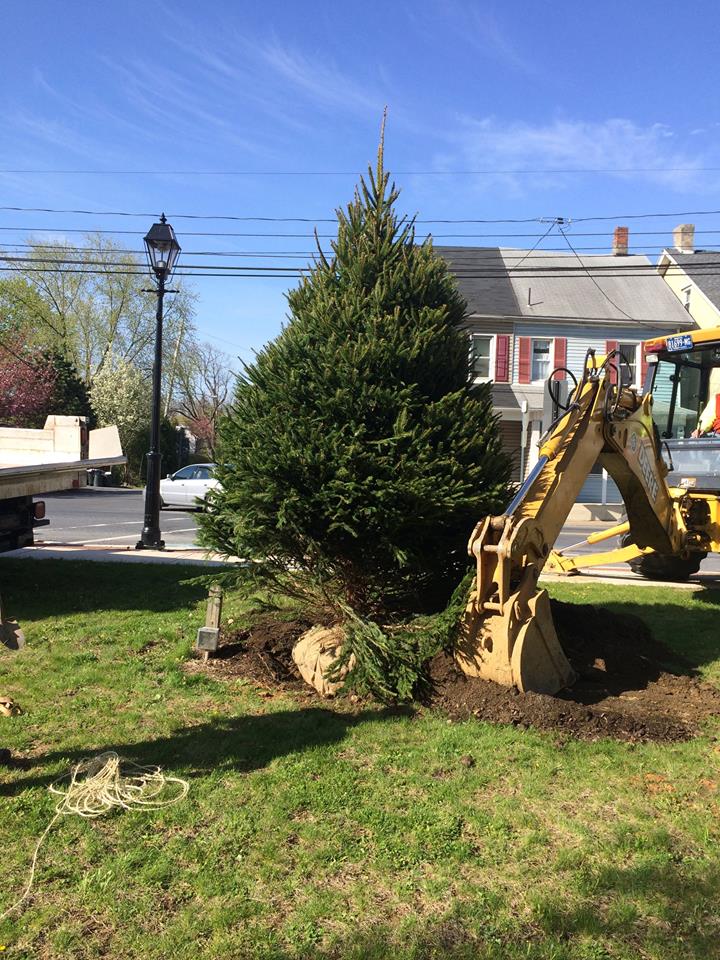 BOROUGH OF BATH’S 13 FT. NORWEGIAN SPRUCE at Monacacy Creek Park was planted on Wednesday, May 7. the tree was donated to the borough from the Unangst family. the tree welcomes residents and visitors to Bath on Rte. 248. Photo by Fiorella Mirabito.

Moore Township’s road crew is working on Smith Gap Rd. presently, one of 20 miles of gravel roadways in the township’s 100 miles of roads, chairman David Tashner of the Moore Township Board of Supervisors said this past Tuesday.

In addition, they are filling potholes from the ravages of winter and wash-outs from a recent heavy rainfall. They are also doing a spring clean-up of intersections. They will be working on a pipe crossing at Keeler Rd. before the road collapses from a corroded pipe, but first need a permit to do so.

In a report on mulch by secretary Richard Gable, he said they’ve gone through eight weeks of mulch from the First Regional Compost Authority in four weeks. It costs $15 per load of compost to be picked up. Every resident in the township can get the mulch they need for their garden work.

Under subdivision actions, the supervisors gave conditional final approval of a one-lot minor subdivision of Betty (Silfies) Walk and approved her sewage planning module as well as deferring road right-of-way improvements until the rest of the land is developed. One lot is being taken out of the farm. Tashner said it will be graded. Engineer Darrin Heckman is the engineer for the subdivision.

Conditional final approval was also given to James Cole, along with deferral of recreation fee because no building is planned at this time on the agricultural property. Surveyor Kenneth Hahn appeared for this plan.