At its midway point, there’s already reason to believe 2014 just might go down as the “Year of the Pennsylvania Bald Eagle.”

In January, the Pennsylvania Game Commission removed the bald eagle from the state’s list of threatened species, capping a 30-year comeback that ranks as one of the great success stories in wildlife-conservation history. And in the months that followed, more than 3 million viewers joined in the celebration, watching online as three bald eaglets hatched, then developed into birds strong enough to fledge the Pittsburgh nest in which they grew up. 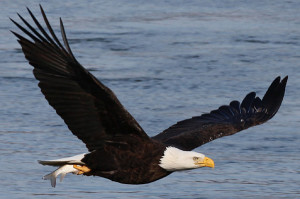 Each year, just before the Fourth of July, the Game Commission releases a preliminary count of bald-eagle nests statewide. The report serves to celebrate the bald eagle – our national symbol of strength and freedom – as well as the terrific progress the species has made in Pennsylvania since the onset of a reintroduction program in 1983.

So far this year, 254 bald-eagle nests have been documented in Pennsylvania, with nesting eagles present in at least 59 of the state’s 67 counties.
The number of nests and the number of counties with nests both are all-time highs for the mid-year report, according to the Game Commission.

Game Commission Executive Director R. Matthew Hough said the report, once again, rewrites that final chapter in the story of the bald eagle’s recovery in Pennsylvania. While the report provides only preliminary data, and still more nests will be documented as the year goes on, the results are heart-warming, he said.

“The all-time high numbers illustrate Pennsylvania’s bald-eagle population is better than ever,” Hough said. “But these are only the ones we know about. There are more.

“Over my career with the Game Commission, I have watched this agency jump-start eagle recovery in 1983, and now I’m seeing the results of all that hard work,” Hough said. “I, and I’m sure all Pennsylvanians, are proud of this amazing recovery. More importantly, more of us are seeing eagles than ever before. That never gets old. They’re such exciting birds.”

Twenty-two of the 254 nests reported so far this year are attributed to adult pairs that have not previously been documented as nesting in Pennsylvania.

That’s a significant number given that the total number of nests documented – 254 – is up only slightly compared to the 2013 mid-year report, which totaled 252 nests by July 4. The fact the number of counties with active nests increased from 57 to 59 between the 2013 and 2014 mid-year reports also speaks to potential expansion in the bald-eagle population, said Patti Barber, a biologist with the Game Commission’s Endangered and Nongame Birds section.

Barber said that, as bald eagles become more common in Pennsylvania, the challenge to document bald-eagle nests could grow. People who have reported a nest as active in a previous year might not realize they should report back each year to help the Game Commission track the population over time, she said. Also, folks might assume bald eagles they’re seeing are associated with long-established nests, as opposed to new pairs setting up territories near established nests, Barber said.

Reports of bald-eagle nests always are appreciated. Perhaps the easiest way to report a nest is to contact the Game Commission through its public comments email address: pgccomments@pa.gov, and use the words “Eagle Nest Information” in the subject field. Reports also can be phoned in to a Game Commission Region Office or the Harrisburg headquarters.

“This year as much as any really has driven home the fact Pennsylvanians are fascinated with eagles and love watching them,” Barber said. “Eagles attract a lot of attention and understandably so, but that doesn’t mean the Game Commission knows about nests in areas where you’ve been seeing them. So please don’t hesitate to report these sites.”

Each year, bald-eagle nests continue to be reported as the year goes on. In 2013, for instance, the preliminary number of 252 nests ballooned to 273 nests by year’s end. Other years have produced similar results.

But even the running tally is something about which Pennsylvanians can be proud, Barber said. In 1983, when the Game Commission launched a seven-year reintroduction program, only three bald-eagle pairs were nesting statewide. Today, there are 254 with more remaining to be counted.

“This is one of the greatest wildlife success stories out there, and it’s not over,” Barber said. “Pennsylvania continues to sustain a healthy and growing bald-eagle population, and the fact eagles are branching out to more areas of the state indicates there are more gains to come.”

Hough noted the enjoyment and excitement that accompanies each bald-eagle sighting. Those qualities, he said, have been evident this year not only in the field, but quantified by the number of people going online each day to watch nature unfold. With the state’s expanding and growing bald-eagle population, there should be plenty to get excited about for many years to come, he said.

“Pennsylvania’s eagles have spent so much of 2014 in the spotlight, and they’ve made for some great stories,” Hough said. “All three of the bald eagles that hatched this spring in front of an online audience fledged their nest – that’s a great story by itself.

“But it’s a story too that’s completely within the character of Pennsylvania’s eagles,” he said. “Each year, there are too many great stories to count, and each year builds upon previous successes to reach new heights.

“You might say that, for many decades now, each year could be considered the ‘Year of the Pennsylvania Bald Eagle,’” Hough said. “And there promises to be many more to come.”

While Pennsylvania’s bald-eagle population is soaring, just 30 years ago, the bald eagle’s future looked bleak. Its population decimated by the effects of water pollution, persecution and compromised nest success caused by organochlorine pesticides such as DDT, only three pairs of nesting eagles remained in the state – all of them located in Crawford County, in northwestern Pennsylvania along the Ohio border.

In 1983, the Game Commission launched a seven-year bald eagle restoration program. The agency, as part of a federal restoration initiative, sent employees to Saskatchewan to obtain eaglets from wild nests.

Initially, 12 seven-week-old eaglets were taken from nests in Canada’s Churchill River valley and brought to specially constructed towers at two sites. At these towers – at Haldeman Island on the Susquehanna River near Harrisburg, and at Shohola Lake in Pike County – the birds were “hacked,” a process by which the eaglets essentially are raised by humans, but without knowing it, then released gradually into the wild.

In all, 88 bald eaglets from Canada were released from the sites as part of the program, which was funded in part by the Richard King Mellon Foundation of Pittsburgh and the federal Endangered Species Fund. This reintroduction jump-started the recovery.

By 1998, Pennsylvania was home to 25 pairs of nesting bald eagles. Within the next three years, the number of nesting pairs doubled and by 2006, more than 100 nests were confirmed statewide. The bald eagle population has continued to grow and expand in Pennsylvania and in January the Game Commission removed the bald eagle from the state’s list of threatened species.

While the bald eagle is no longer threatened in Pennsylvania or nationally, care still should be taken when viewing eagles, to prevent frightening them.

Those encountering nests are asked to keep a safe distance. Disturbing eagles is illegal under the federal Bald and Golden Eagle Protection Act. Some pairs are tolerant of human activity, while others are sensitive. Their reaction often depends on the activity and approach of the individual, the nesting cycle stage, and if the eagles are used to seeing people.

Adults that are scared from a nest could abandon it, or might not return in time to keep unhatched eggs or young nestlings at the proper temperature. Frightened eaglets also could jump from the safety of the nest, then have no way to return.

Those viewing eagle nests are urged to keep their distance and use binoculars or spotting scopes to aid their viewing.
For more information on bald eagles and eagle-viewing etiquette, visit the Game Commission’s website, www.pgc.state.pa.us.