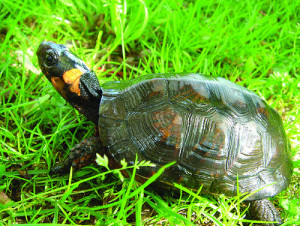 The Lehigh Township supervisors meeting on July 8 opened with a discussion of what should be included in the minutes from previous meetings. Supervisor Cindy Miller felt that the minutes didn’t have accurate representation of their recent capital improvement plan discussion. “I think the minutes need to more accurately reflect what happens in these meetings,” she said. The June 10 minutes were tabled to add more information about the Capitol Improvement Plan discussion. Later, Solicitor David Backenstoe discussed ways that they could improve the minutes, including submitting drafts to the supervisors to review and make edits to.

The supervisors received some good news from Township Engineer Phil Malitsch. He told them that work to replace culverts could move forward since he received a notice from the Fish and Wildlife Service verifying that no bog turtle habitats were found in the culverts. Bog turtles are classified as an endangered species in Pennsylvania and, if found, could have delayed construction on the project. The township was directed by the Fish and Wildlife committee to conduct a study on two of the seven culverts, costing $1,000 to $2,000. Once verified, a permit to continue work will come from the state Department of Environmental Protection.

Lehigh Township Police Chief  Scott Fogel read council a letter that Northampton District Attorney John Morganelli sent to police departments in response to Easton council’s unanimous petition to the state in favor of identification cards for undocumented immigrants. In the letter, Morganelli invokes terrorist threats and other detrimental consequences of issuing these ID cards. Chief Fogel said that he disagreed with Easton council’s petition for illegal immigrant ID cards and gives an example of a hit-and-run accident where an undocumented immigrant presented him with falsified information. Chairman Darryl Snover than made a motion to write a letter to the state in opposition to ID cards for undocumented immigrants. The motion passes unopposed.

“I hope more patriots stand up like they did recently in Murrieta, California. We can’t keep letting people enter the country illegally while people are trying to do it the right way,” Snover said.

Cindy Miller distributed a capitol improvement plan timeline to council for review. The CIP will be discussed  at the next meeting on July 22.