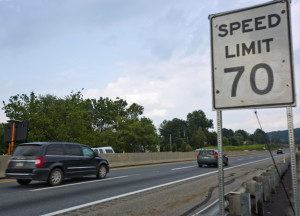 Pennsylvania moved ahead with steps to make travel more efficient today as the Pa. Turnpike activated its 70 mph speed limit from Blue Mountain (Interchange 201) to Morgantown (Interchange 298) and PennDOT announced it will launch 70 mph pilot projects on a pair of interstates next month.

“As we increase the speed limit on the Pennsylvania Turnpike, motorists need to increase their restraint behind the wheel accordingly,” said Turnpike CEO Mark Compton. “Remember, even though we’re increasing the speed limit, motorists still must obey the law and drive safety. After all, 70 mph is the maximum speed, not the mandatory speed.”

The Turnpike’s new 70 mph signs were put in place yesterday; it took Turnpike maintenance employees about six hours to switch out 35 speed-limit signs along the 100-mile stretch.

• 88 miles of Interstate 80 from Exit 101 (DuBois) in Clearfield County to mile marker 189 in Clinton County; and
• 21 miles of Interstate 380 from Interstate 84 in Lackawanna County to Exit 3 (Pocono Pines/Mt. Pocono) in Monroe County. “After thorough analysis and reviewing other states’ practices, PennDOT is piloting this speed limit so we can use the data to determine where else the maximum speed could be increased,” Schoch said. “Safety is our top priority in this process, and I urge drivers to obey the speed limit whether they’re in their neighborhood or on an interstate.”

PennDOT will use data collected from the pilot locations while evaluating other 65-mph roadway sections for potential 70 mph implementation in the spring or summer next year. Roadway sections that can safely accommodate the increased speed could start being signed soon after the evaluations are complete.

Compton said the Turnpike’s 70-mph speed limit could be implemented on remaining portions of the 550-plus mile toll road system in 2015.

“This initial 70-mph zone will be monitored for six to eight months to see how the higher speed limit works,” Compton said. “If everything goes well, I’d expect the remainder of the Turnpike will switch over to 70 mph speed where appropriate and safe next spring.”

While much of the 100-mile stretch will be posted at 70 mph, there will be areas where drivers will see reduced speeds, specifically at curves posted at advisory speeds between 60-65 mph. In addition, work zones in the 70 mph zone will be posted at 55 mph – meaning an end to 40 mph work-zone speeds in this section.

“With this increase, we remain committed to protecting the lives of the people traveling as well as the men and women who are working out on the roadways,” said Lt. Edward Murphy of Troop T, the unit in charge of Turnpike patrols. “To ensure motorists heed the 55 mph work-zone speed limit, State Police will be conducting ‘Orange-Squeeze’ operations where troopers run radar inside construction vehicles instead of patrol cars.”

Passed last fall by the General Assembly and signed by Governor Tom Corbett, Act 89 of 2013 enabled the PTC and PennDOT to raise the maximum speed limit on freeways within Pennsylvania to 70 mph. The plan invests an additional $2.4 billion to $2.5 billion into Pennsylvania’s transportation assets by its fifth year.

The PTC is helping motorists adjust to the changes by offering a new option on its TRIP Talk smartphone app. Once the app is turned on, drivers will be able to choose if they would like audio alerts when entering a reduced speed zone. For example, the app will automatically alert drivers as they enter a 65 or 55 mph area. The app is free and can be downloaded at http://www.paturnpike.com/triptalk.