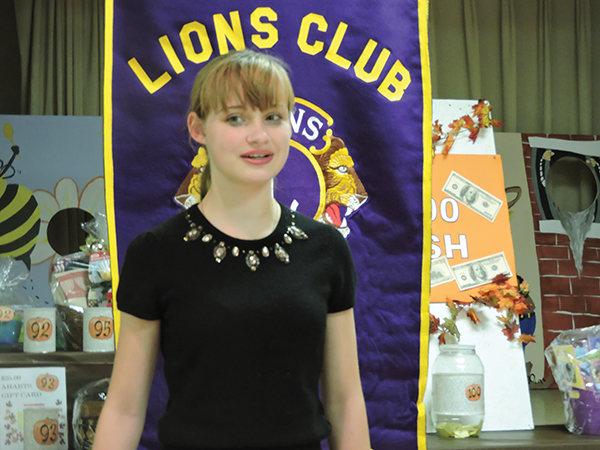 A visually impaired student at Central Catholic High School in Allentown spoke to members of the Bath Lions Club at their dinner meeting this past Wednesday in the fellowship hall of St. John’s Lutheran Church.

Maddie Link, a junior at the school, showed the Lions some of the modern technology that helps her study and do her homework. Book reading devices, a magnifier, and a laptop Braille device that tactilelyshows the letters are some of the implements. Maddie types all her notes on the Braille device, and she can play them back. When she takes a test it goes on a flash drive with Braille. Her Victor reader has the equivalent of seven textbooks. She has also scanned a textbook and put it in the reader.

She attended a seminar at Penn State University for the blind on independent living and was one of four with the poorest vision. As part of the program, the blind and visually impaired students were given their own iPads.   Maddie said Apple is a pioneer in making devices with acceptable functions for the blind.  The summer academy also taught mobility.

While math is difficult, Maddie has no problem doing honors chemistry and honors geology for her homework on her Braille device. There are user manuals on it, which she uses.

She is one of the few people her age who has a guide dog. Snow Bird was at her side as she spoke. But she has to speak in French to the dog, because he was raised by a family in French Quebec.  She has had the dog since her freshman year, and to get around she has to tell Snow Bird where to go.

The iPad can also scan and when a $10 bill was held up to the device by her mother, Kathy, the iPad told her audibly what the denomination was.  It can read American currency, but no coins, she said.

Maddie has a condition that affected her retina. Kathy said when her daughter was an infant she had no light perception at six months old. Her vision leveled out to what it is now at age 11. Kathy said when the family took a trip, Maddie sat in the back seat going over her user manual.

Although in 11th grade, she has started a college search. She would like to attend Georgetown University, but it is important that any college where she is accepted has student support services, she said. 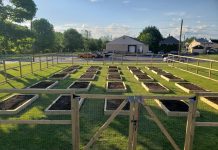