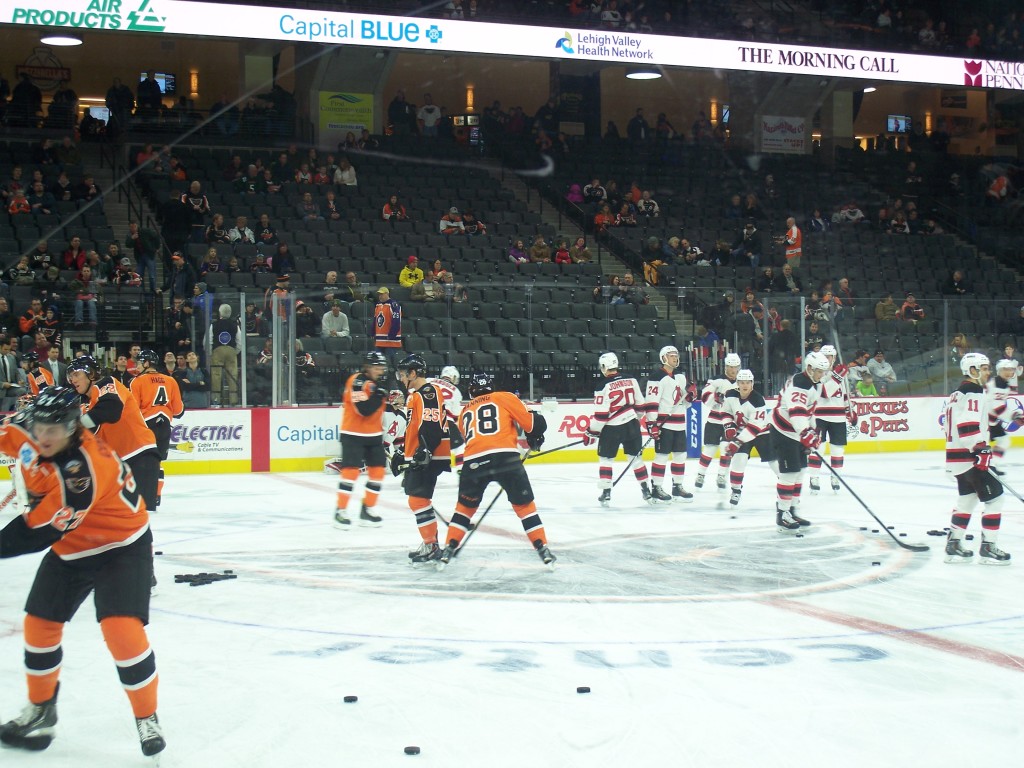 Heading into last weekend, the Lehigh Valley Phantoms had a golden opportunity to climb up the standings in the East Division.

They were three points behind a slumping Wilkes-Barre/Scranton Penguins team and just one behind the Hershey Bears, making up a game in hand Friday night against both of their division rivals. After a pair of losses on the three-game weekend – Friday night to Albany and Sunday to Hershey – the Phantoms find themselves still stuck in third place in the division, now four points out of the lead.

“Games in hand are a romantic thought,” Phantoms forward Andrew Gordon said, adding, “If you don’t win them, they’re nothing.”

The Phantoms appeared to have righted the ship in a 5-1 win at home over the Binghamton Senators on Saturday, only allowing the BSens four power play opportunities after being shorthanded 10 times in Friday night’s 3-2 loss to Albany.

“We finally played some five on five hockey, for once,” forward Nick Cousins said after the game. “It seems lately we’ve been taking a lot of penalties and it’s a lot of special teams. I think when you stay disciplined, that it gets everyone into the game. We were able to roll four lines, everyone contributed. It’s good for everyone, a good win.”

Cousins led the way from the opening shift of the game, scoring 14 seconds into play to get the Phantoms started. Cousins went on to record the first home trick in Lehigh Valley Phantoms franchise history, and now has 11 points (6G-5A) in his last seven games.

The difference the past few games for the Phantoms has been an increased emphasis on shooting the puck more.

“I think [head coach Terry Murray] wants us to shoot the puck more, even from bad angles,” Cousins said. “Putting the puck on net is never a bad thing. That’s what happened [Saturday vs. Binghamton].”

Phantoms head coach Terry Murray confirmed his emphasis to the players on getting the puck to the net, as the Phantoms are currently 22nd out of 30 teams in the American Hockey League (AHL) in goals scored.

“We’ve really put a big focus on the more shots mentality the last 10-20 games,” The number was good on average – it’s kind of what we’re asking for – but we were not getting the goals. Pucks were not finding their way into the net. We asked for a little more of getting the pucks to the net mentality, getting traffic in front and getting those second and third chance opportunities and now the puck finds a way.”

The Phantoms came up short Sunday in Hershey, but have a chance for redemption Wednesday night as the Phantoms host the Bears at PPL Center at 7:05 p.m. ET. The Phantoms look to head into the All-Star break (Sunday January 25-26th) on a high note, with two more games this weekend Friday night in Syracuse against the Crunch and Saturday at home against the St. John’s IceCaps.

The Lehigh Valley Phantoms 2015 AHL All-Star representative is defenseman Brandon Manning, who will be playing in his second AHL All-Star game. This year’s event is hosted by the Utica Comets on January 25-26th with a skills competition and all-star game on back-to-back nights, quite similar to the way it’s done in the NHL.