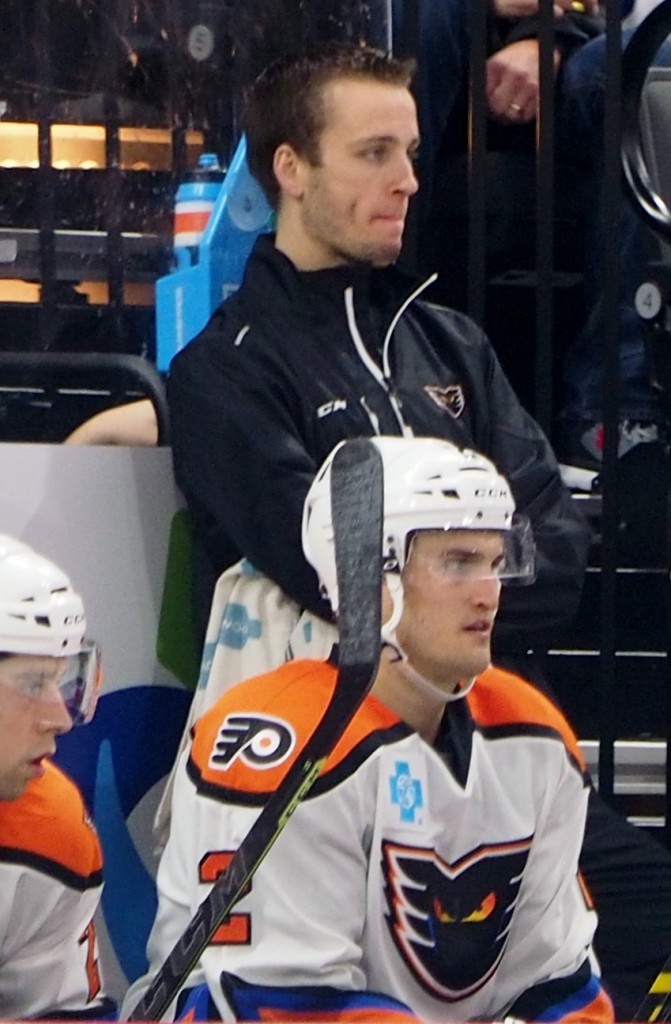 Andy Rannells (standing) has quite a time consuming job with the Lehigh Valley Phantoms. -Photo by Nina Weiss

When the Lehigh Valley Phantoms have a 7 p.m. home game, he arrives at the PPL Center around 5:45 a.m. – perhaps to sharpen a few pairs of skates he hadn’t gotten to the night before. After he puts out the players’ gear and practice jerseys for the team’s morning pre-game skate and the team completes the practice, it’s drying the players’ hockey gloves, cleaning up the locker room and re-organizing it with game jerseys.

The players go home for an afternoon meal and nap before coming back to the rink to get ready for the game, but he stays – either to get a head start on ordering more hockey equipment for future games and practices or to get in a run (he trains for half-marathons and full-marathons that he does in the summer).

The players come back to the rink around 4:30 p.m. to get ready for that night’s game, their equipment and jerseys all neatly stowed away in their respective locker stalls and their replacement hockey sticks already setup on the bench because he stayed and got everything in order.

During the game, he’s the guy seen leaning over the bench extending as far as he can with a hockey stick so a Phantoms player who has broken his during play can swing by and grab his new one on the fly. He also sharpens skates with a crafty tool on the bench between players’ shifts on the ice during play for a quick fix if necessary, or with the standard machine off-ice between periods. He also fixes broken equipment. A busted strap on a helmet or protective gear? No problem.

After the game, the routine is similar to what is done after the morning skate. The gloves are put on the drying racks, the jerseys are washed, the locker room is cleaned up and re-organized for the next day’s practice.

If the team has another game the following night on the road, the players are putting their gear in hockey bags left at their locker stalls directly after the game so he can load up the bags on the bus while the players do their respective cool downs and shower into clean clothes for the overnight bus ride to their destination for the next night’s game.

When the bus arrives to the city the team is going to be playing in – likely at around 1 or 2 a.m. or later – the players are dropped off at the hotel to get some sleep while he and some of the other off-ice staff unload all the gear at the rink so it’s ready for either a pre-game skate or the next night’s game.

But who is, ‘he’? He is Andy Rannells – the Lehigh Valley Phantoms head equipment manager.

“That’s the game day routine,” Rannells said, adding, “It’s a routine though, so it’s not terrible. There are a lot of areas we have made more efficient. It’s all about being as efficient as you can. A lot of planning and thinking ahead – it’s better to be prepared.”

Working all kinds of around-the-clock hours is nothing new to Rannells. In his second year with the Phantoms as the team’s head equipment manager, Rannells has come a long way from his hometown of St. Paul, Minnesota, where he first was introduced to his craft by helping his high school hockey team.

“It was a pretty cool experience, being able to do that. It was something I really enjoyed,” Rannells said of being behind the bench of his high school team helping out. “I kind of decided in my junior year of high school that’s what I wanted to do, was to pursue that.”

That turned into making his college decision to go to the University of Minnesota-Deluth to help the men’s and women’s ice hockey teams as a student assistant.

“The first year was a little different, just because it wasn’t what you were used to in high school. It was a little bit more,” Rannells recalled of helping out in his freshman year, leaning on the 30 years of experience of the equipment manager he was helping out.

After college, Rannells got a job as an assistant equipment manager with USA Hockey and worked with the United States National Team Development Program, where he shared a locker room with the country’s most talented hockey players born in 1993 – several of whom are now in the National Hockey League (NHL).

After a year in Ann Arbor, Michigan with the US National Team Program, Rannells caught his big break. Although he had applied for the equipment manager position at his alma mater Minnesota-Deluth while still attending – a position that opened up because his mentor had retired – he didn’t get the job because he was still in school. The guy who took over at Minnesota-Deluth that Rannells worked under during his senior year had called him and told him of an opening at the University of North Dakota.

In June 2010, Rannells became the head equipment manager for University of North Dakota Men’s hockey team – a position he held for four years prior to coming to the Philadelphia Flyers organization to work as the Phantoms’ head equipment guy.

“I really enjoy working with the Flyers [organization],” Rannells said of his decision to come east, explaining the path he took to get to this point in his career.