The 1964 film Mary Poppins, starring Julie Andrews and Dick Van Dyke, is one of Disney’s most beloved films and it boasts perhaps what may arguably be one of cinema’s most memorable musical scores. About forty years after the film’s release, 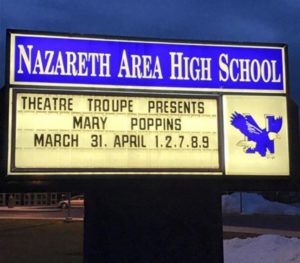 a stage adaptation of the musical debuted on London’s West End and Broadway. It is this award-winning adaptation that students in the Nazareth Area High School Theatre Troupe brought to life in its annual spring musical, a participant in this year’s Freddy Awards.

There are several differences between the popular film and the stage musical, but the same cast of characters and the same classic Sherman Brothers score remain, a score that Nazareth students in the cast were expertly able to tackle. There is also a series of new songs and characters those familiar with the film may not recognize, but will quickly learn to love.

Dibilio was able to perfectly capture the sweetness, sternness, and slight mystery of Mary Poppins and stole the stage when she performed the loveable songs like “A Spoonful of Sugar,” and new songs like “Practically Perfect.” Meanwhile, Zegeye, in true Bert fashion, never stopped smiling, whether he was strutting across the stage during “Jolly Holiday” or somersaulting through the air during “Step in Time.”

Mr. and Mrs. Banks were given significantly larger roles in the stage adaptation than they had in the film, which gave both Fuquay and Manzo the opportunity to showcase their vocal talents in songs such as “A Man Has Dreams” and “Being Mrs. Banks.” Both songs showed the two parents struggling to succeed both professionally and personally as parents of Jane and Michael.

Meanwhile, Ellis and Louw seemed to have great fun playing the meddlesome and sometimes selfish Banks children, especially when Mary Poppins and Bert took them on magical adventures through the park and over the rooftops of London.

There were also some characters from both the P.L. Travers book and the 1964 film that were given more prominent roles in this stage adaptation, including Mrs. Brill, the Banks family maid, portrayed by senior Isabelle Dara; Robertson Ay, the Banks family butler, portrayed by sophomore Andrew Talarico; and Miss Andrews, the villainous nanny who comes to replace Mary Poppins, portrayed by junior Toni Faccioponti. In addition, junior Hailey Durner played the Bird Woman and performed a beautiful rendition of “Feed the Birds” with Dibilio.

The entire ensemble cast should also be celebrated for their energetic performances of “Jolly Holiday,” “Step in Time,” “Let’s Go Fly a Kite,” and of course “Supercalifragilisticexpialidocious.” Whenever the entire cast appeared on the stage, audience members knew they were in for a treat.

The brilliant sets and colorful costumes also helped audience members get lost in the performance, while the classic songs from the show would be nothing without the student orchestra behind them. Meanwhile, a special shout out must go to the student stage crew, who helped Mary Poppins fly across the stage with her signature umbrella, a favorite scene for the entire audience.

The students in the cast, crew, and orchestra, as well as the school leaders and community members who have supported them, should all be proud of the magical and, in Mary Poppins’s own words, “Practically Perfect” production they put on.

The Freddy Awards will be broadcast on Thursday, May 25 at 7 p.m. on WFMZ.