“I named one of the spiders Earl and my family and I laughed about him all Christmas season long,” Ferguson says. 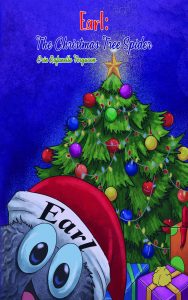 She soon drafted “Earl: The Christmas Tree Spider,” which tells the story of Earl the spider as he journeys from the forest to find a loving new home at Christmastime.

Ferguson sent her manuscript to over 50 publications. After more than a year of anticipation and re-writing, Ferguson was close to giving up…until she received a big acceptance envelope from her current publisher.

“[I] knew my journey as an author was about to begin,” she says.

Ferguson had never anticipated writing a children’s book. In fact, the local writer who has made a career covering arts and entertainment in the Lehigh Valley wanted to initially write a crime novel.

“But once this story presented itself to me, I started thinking about the joy children bring to us,” she explains.

Like Earl, Ferguson says there are far too many children searching for a loving home and family.

“Knowing that our country has so many children in foster care that are looking for…a loving home and a family to accept them as one of their own is simply heartbreaking,” she says.

With the publication of her book, Ferguson hopes to collaborate with Lehigh Valley Families Together to bring the area’s foster children joy during the holidays.

She wants the children who read her book to learn about hope, love, acceptance, and family.

“I hope they give the love they receive away to others as well,” she adds.

Ferguson says Earl’s adventure is far from over, with plenty of inspiration and encouragement from her children.

“I’m hoping to follow Earl on his journey through the holidays,” she says. “My daughter keeps talking about Earl’s friend Pete, so we shall see where that takes us.”

“Earl: The Christmas Tree Spider” is currently available at barnesandnoble.com and amazon.com. Ferguson will be holding three book readings and signings: December 1 at Barnes & Noble in Center Valley at 10:30 a.m. (with a special appearance by Mr. and Mrs. Claus), December 7 at the Moravian Book Shop from 4 until 6 p.m., and December 21 from 11 a.m. to 1 p.m. at 4445 Southmont Way in Easton. Ferguson will also be at Camp Cake in Nazareth on December 7 from 11 a.m. to 1 p.m. where she will host a book reading, and afterwards children will be able to decorate cupcakes with little Earls and festive décor. Tickets will be available on Eventbrite.

“I love the holidays,” she says. “If I can spread positive messages for our children to grow up on…then I am really winning…we all are.”