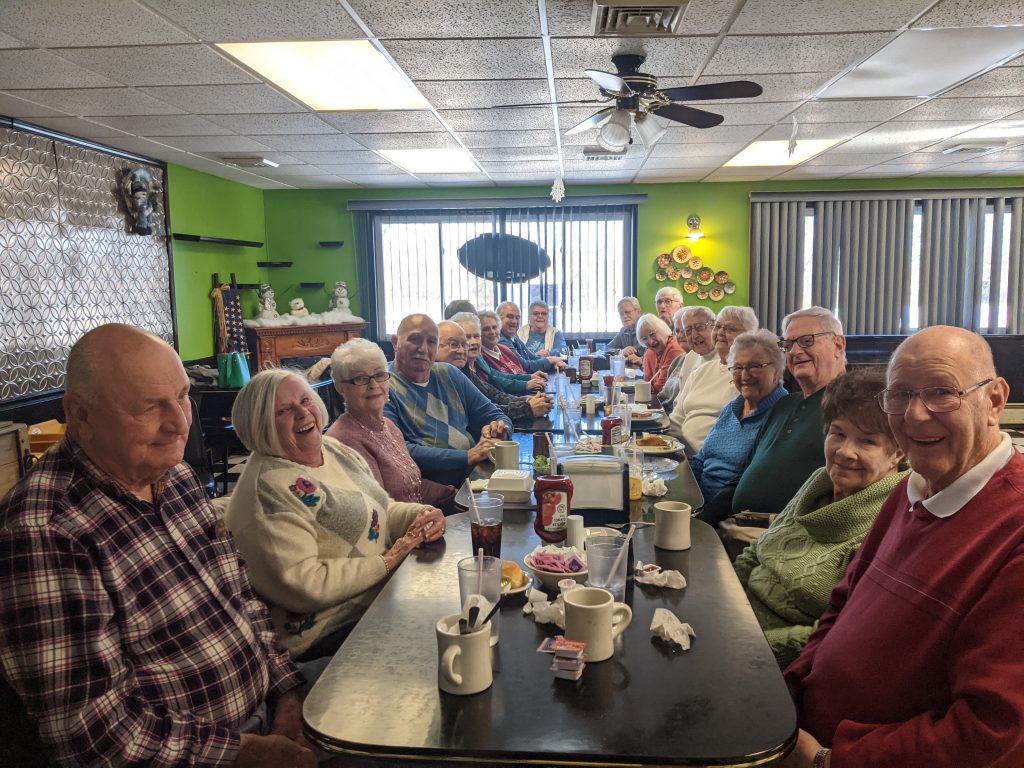 There is a special group of people that can be found joking, laughing and exchanging stories at the Blue Mountain Drive-In and Family Restaurant every single Friday. The Friday Night Dinner Club, the drive-in’s senior group, began with just a few and has grown to include 23 people. The original group was formed at the old Cherry’s Diner in Kresgeville when it was owned by Robert, aka Bobby Cherry. When Cherry’s Diner was sold, the original group, consisting of 11 people, moved to Blue Mountain Drive-In, currently owned by Bobby Cherry’s daughter, Lisa Csencsits.

Over the years many have been invited to the group after losing a spouse. Both new and long-time friends have connected within the group, friendships have grown into couples and even a marriage proposal too.

Frank Snyder and Alberta Banko met through the dinner club and were recently engaged at the restaurant just before Christmas.

“For me to get a beautiful woman like this, I am happy,” said Frank proudly. The couple were wed by Frank’s son at the restaurant on February 12 in front of all of their favorite people, all members of the dinner club included.

“It’s a privilege to hear them joke, laugh, tell stories and even sing (sometimes),” said Lisa Csencsits, “There is a library of history that is discussed while sharing a meal.” The only time there is a break in conversation and the group is quiet is once their food arrives.

“The comradery of the group is really nice; I didn’t realize there were this many elderly people in the area,” joked Robert Fehnel. Fehnel was born and raised in Danielsville, served in the military for four years, three of those years were stationed in France, and he was employed by Aramark for 42 years.

“It’s a good thing to look forward to every Friday,” said Fehnel. He and his wife Barbara will be married 60 years in September.

Doug Heckman, another member that can be found at the restaurant on Fridays, is also a veteran, having served from 1961-1965 in the Navy as a ship serviceman. Heckman fought in Cuba during the Cuban Crisis.

Another veteran at the table is Robert Eckhart of Little Gap, an avid local hunter. Robert sat beside his wife of 67 years, Pauline, whom he met at a high school basketball game. Robert and Pauline were spotted eating at the restaurant frequently until the group invited them to join them some time ago.

Amongst the group are some local business owners, such as Carol Simcoe with Simcoe’s Gallery and one of the original owners of Simcoe’s Beverage. Darrell Beck, one of five siblings that owns Becky’s Drive-In, was also spotted at the table. Two of the more recent members of the group are Mr. and Mrs. Beers, who owned trailer courts in Carbon County. Phyllis Geiss, who owned and operated Phyllis Geiss’s Beauty Salon in Lehigh Township for over 40 years, sat beside her husband Gary Geiss, one of the original members of the “friendly five” boat club, which merged with the original dinner club long ago.

“These people are the salt of the earth; they are wonderful, wonderful people and I love getting together with them,” said Gladys Polgar, a member of the club since its inception.

“Our customers are the heart of what we do,” said Csencsits, “We look forward to experiencing many more memories filled with laughter, friendship and love.”

In the midst of a pandemic where sickness and bad news is all around us, sometimes something as simple as friendship and comradery makes all the difference.

“We’re all in this thing together,” said Frank Snyder.