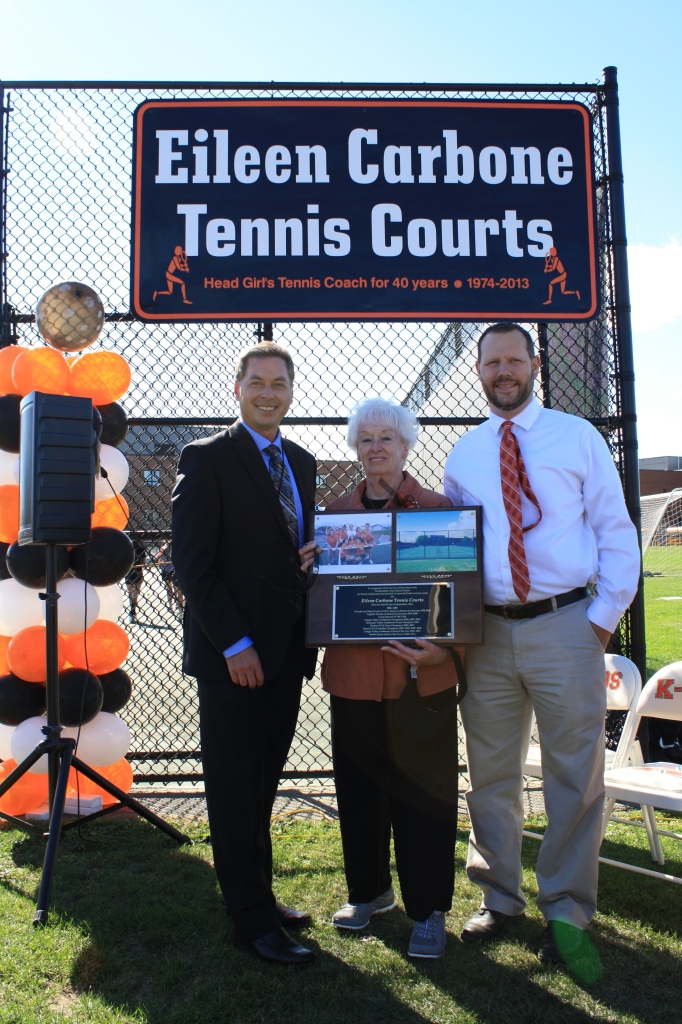 Following the Senior Day recognition ceremony for the Northampton girls soccer team, a dedication and naming ceremony took place at the Eileen Carbone Tennis Courts of Northampton Area School District on Laubach Avenue. The Board of Education, Superintendent Joseph Kovalchik, students, parents and members of the community were there to help mark this momentous occasion. Kovalchik introduced Carbone noting that he remembers her from when he was a student sitting in her English class. He said that Carbone represented and earned respect from colleagues, parents and students and that she is a great ambassador for the district mission statement: “Northampton Area School District is dedicated to educating and developing responsible citizens who learn from the past, listen to the present, and lead our future.”

The Tennis Courts honor Carbone, who introduced league soccer to the district in 1974. She went on to coach Northampton girls soccer teams from 1974 until 2014 when she retired. In addition to coaching the league for 40 years, Carbone was an English teacher in the district for 35 years, from 1968 until 1998. She had a career record of 305 wins and 266 losses with the Northampton Area School District. She was recognized in 2002 and 2004 as Lehigh Valley Conference Coach of the Year as well as Middle States Coach of the Year in 2003 and 2014. Carbone lead her teams to several championships including Mountain Valley Conference Team Champions in 1994, Lehigh Valley Conference Champions in 2002, 2003 and 2004, District XI 3A team Champions in 2004 and 2005, and District XI 3A Doubles Champions in 2003, 2004, 2005 and 2006.

The senior girls, with a plaque that recognized her dedication to tennis, the Konkrete Kids and her students also honored Mrs. Carbone. Senior girls Delaney Haggerty, Kristin Kuntzman, Jenna Meixsell and Jolene Stearns were all there to thank and honor Carbone.