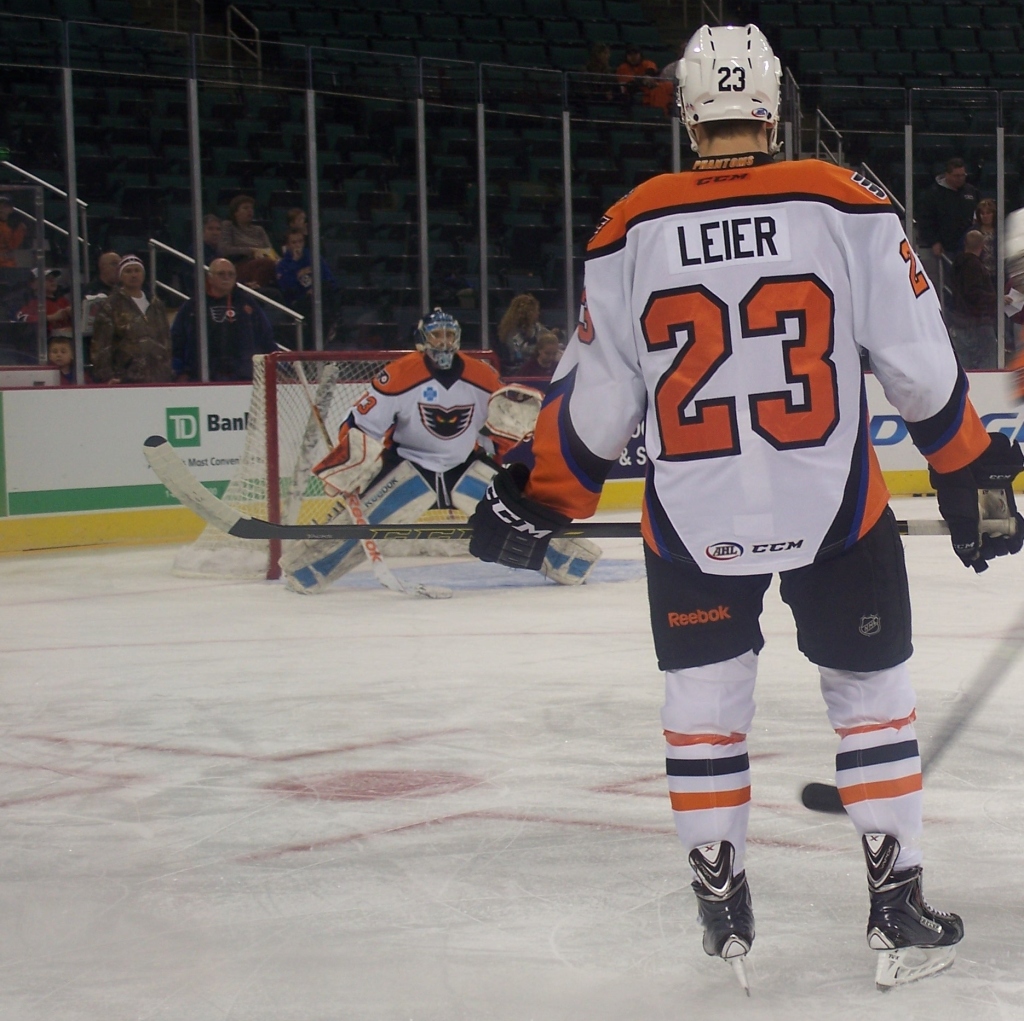 The Lehigh Valley Phantoms (9-8-2-0) sit in fourth place in the East Division after the first quarter of the season, six points behind the first place Penguins with three games in hand on their division rival. After a mediocre November (5-6-1-0), the Phantoms look start the month of December and the weekend off with a win over the rival Penguins in Wilkes-Barre Friday night.

“These are games we need to find a way to win,” Phantoms defenseman Brandon Manning said after the Phantoms 3-1 loss to the Penguins back in their last meeting on November 14th.

Manning tied that game up in the third period with a power play goal, but the Penguins responded with an even strength goal and a last-minute empty net goal to pull away with the 3-1 win.

The game three weeks ago – the third of 12 meetings between the two teams – was the start of an eight game points scoring streak for Manning, but as the Phantoms get set to face the Penguins a fourth time, Manning is more concerned about two points in the standings than one point to extend his scoring streak to nine games.

“Personal success is great, but if the team’s not winning it doesn’t mean much,” Manning said, adding “it was a good team win [Saturday] and it’ll feel good heading into next weekend. [Personal achievements] are good, but as long as the team wins – that’s what matters.”

Rookie goaltender Anthony Stolarz started all three games last week after starter Rob Zepp tweaked something during the warm up skate of Wedensday night’s game. Zepp (lower body) was out of action last weekend but could return as soon as Friday night in Wilkes-Barre. The Phantoms rebounded from two disappointing losses at home Wednesday night against Springfield and on the road Friday night versus Albany with a 4-3 win over the Norfolk Admirals Saturday night to end last week on a bit of a positive note.

As is the status quo in the American Hockey League (AHL), there’s no guarantee that the team you faced three weeks ago will have the exact same lineup when you meet again for a rematch.

The Penguins have seen three of their players called up to the NHL – forwards Jayson Megna and Andrew Ebbett and defenseman Brian Dumoulin – and a trio of injuries including forwards Nick Drazenovic and Anton Zlobin and defenseman Taylor Chorney in the month of November.

The Phantoms, meanwhile, have been getting healthy and getting bodies from the Philadelphia Flyers with the exception of rookie center Scott Laughton, who remains in the NHL with the Flyers. The Phantoms received forwards Blair Jones and Jason Akeson from the Flyers while also seeing defenseman Mark Alt return from an injury.

The Phantoms power play seems to be benefitting the most from the recent influx of talent. In the team’s last six games – coinciding with Jones’ season debut with the Phantoms – they went 0-for-14 on the power play in his first three games with the Phantoms but have since gone 5-for-15 in their last three games with Jones running the power play, with Manning and Alt on the blue line setting up rookie Taylor Leier for a shot and 6’4, 215 pound Zack Stortini screening the goaltender.

Leier – a 1st year pro – has tallied a power play goal in each of his last three games and has goals in four of his last five to help pace the Phantoms offensively. In 19 games this season, Leier has 11 points (seven goals, four assists) and his 7-goals lead the team.

After Friday night’s game in Wilkes-Barre against the Penguins, the Phantoms will have a home-and-home series with the Bridgeport Sound Tigers, starting Saturday night in Allentown at the PPL Center at 7:05 p.m. ET and concluding with a 3:00 p.m. Sunday afternoon contest in Bridgeport.