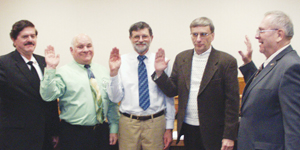 Northampton Borough Council, at its meeting this past Wednesday, Oct. 16, passed a resolution on a sewage module, okayed a request for use of the portable band shell, and appointed personnel to the Board of Health and Planning Commission.

The resolution authorized the submission of a sanitary sewage module to the Pa. Dept. of Environmental Protection (DEP) for replacement of the Smith St. Pumping Station.

Council voted to sign the curtailment service program agreement with Comverge, which provides power if needed during June to September for the wastewater treatment plant. During the previous three years of the agreement that the Water Authority was with the program, it was not needed. Signing the agreement would give the borough $13,262 each of the three years.

Council approved the request of the Northampton Area School District for use of the portable band shell on Nov. 17 at Becky’s Drive-In in Berlinsville, Lehigh Township, so that there could be a bonfire celebration that night from 6-9 p.m. before the annual football game between Northampton and Catasauqua on Thanksgiving Day.

Denise Prockl was appointed to the Board of Health, filling the vacancy left when Sherry Neff-Maikits moved out of Northampton.

Nicholas Politi and Kenneth Hall were appointed to the Planning Commission, and it is expected that Duane Filchner will also re-apply. The commission will be needed as the project for the new Northampton Middle School moves along in the coming months.

• A check for $27,500 has been received from Northampton County gaming revenue and it will be used for part of the cost for a new 100 k.w. generator at the Northampton Community Center. The center’s board of directors will provide the remaining $50,000 needed for the generator.

• The final ten “Welcome to Northampton” banners have been placed on poles along Main Street.

• It was announced that the annual Christmas tree lighting ceremony will be held on Sunday, Nov. 25 at 5:30 p.m. at the intersection of Main St. & Laubach Ave., where a donated tree will be placed by the borough’s street department. The rain date is Monday, Nov. 26 at 7 p.m.

• About 1,600 runners are expected to participate in the Delaware Heritage Trail marathon on Nov. 4, starting at Smith St., west on Laubach Ave., west on 21st St., and connecting with the trail from there.

• The borough will host its annual municipal auction on Saturday, Nov. 3, starting at 9 a.m. in the basement of the office building, with eight municipalities participating. The fire department will be selling breakfast food and lunch at a concession stand as part of the auction.

• A new five-year sewer agreement has been worked out with Allen Township.

• Borough Manager Gene Zarayko noted that because there was some funding left over from the 2012 street paving program, he had the public works department pave the parking lot area along Canal St. across from the Hungarian Club. In another paving note, Northampton County Dept. of Economic Development gave permission to use some funding that was left over from the Center St. parking lot paving program to buy two signs that were installed there.

• Atlas Machining & Welding has donated $500 to the police department’s K-9 program. Police Chief Ronald Morey and K-9 Officer John Mullner participated in the health fair held at Sacred Heart Assisted Living with the K-9 dog and also did some fingerprinting for identification.