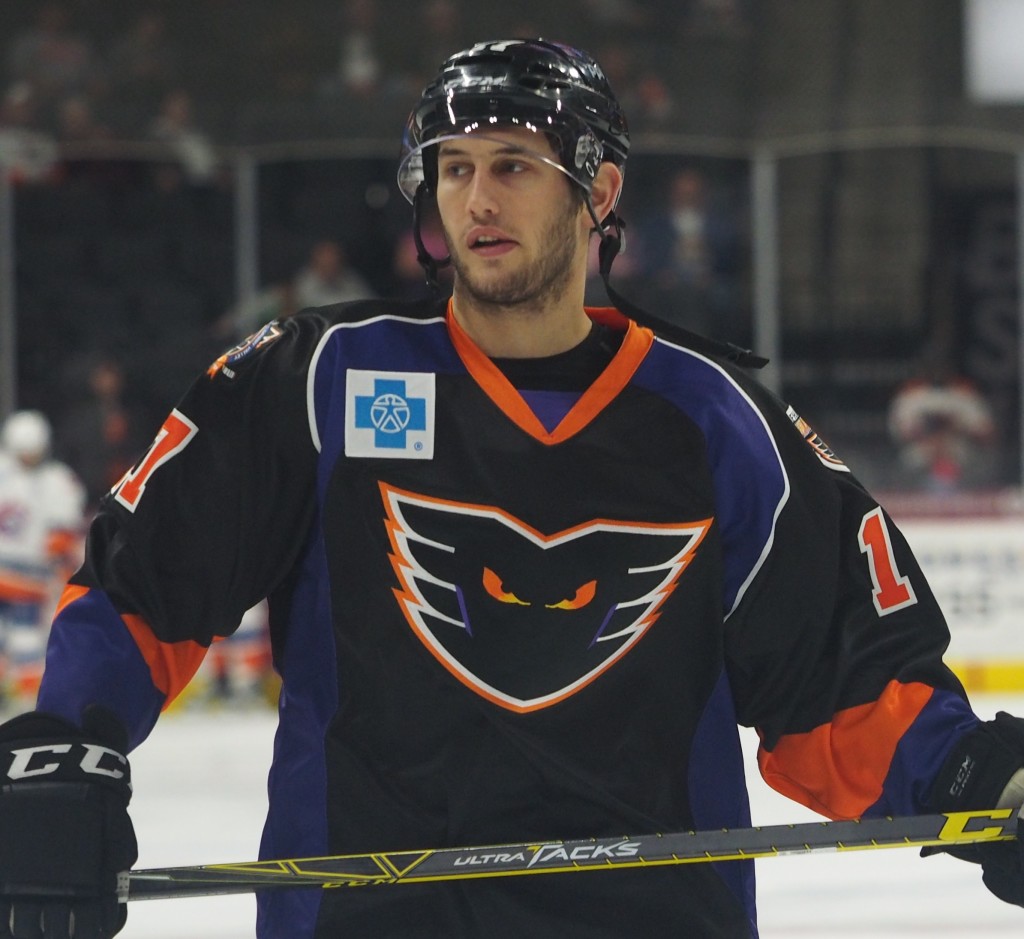 Kevin Goumas has been lightning in a bottle since his arrival to the Reading Royals. Photo: Nina Weiss/The Home News

The Philadelphia Flyers and Lehigh Valley Phantoms might be in offseason mode, but the Flyers’ ECHL affiliate Reading Royals are in the second round of the Kelly Cup Playoffs after an impressive upset of top-ranked Toledo saw the Royals advance following a Game Seven win last week.

The Royals are currently two games into a seven-game second round series tied at one game apiece with the Wheeling Nailers, ECHL affiliate of the Pittsburgh Penguins. The next three games – Games Three, Four and Five – will be played at the Santander Arena in Reading where the Royals look to make good use of home ice advantage after splitting the first two games of the series on the road.

In total, nine players who have appeared in the ECHL playoffs with Reading spent some time in the AHL this season with the Phantoms, including forward Kevin Goumas whose hat trick last week in Game Seven led the Royals to a series-clinching first round win. Goumas currently leads the Royals in postseason scoring with ten points (four goals, six assists) through nine games.

While the NHL’s free agency period doesn’t begin until July 1, two players who were on AHL deals with the Phantoms in 2015-16 have already found new homes for next season.

Following a three-year Canadian junior hockey league career in the Western Hockey League (WHL), Padakin spent his first year of professional hockey in 2015-16 split between the Phantoms (AHL) and Royals (ECHL). In his time with Lehigh Valley, he tallied nine points (two goals, seven assists) in 41 AHL games while putting up much better offensive numbers during his stint in Reading with 17 points (eight goals, nine assists) in 26 ECHL games.

The move to Sweden presents a fresh start for Walker, who joined the Phantoms on an AHL contract last offseason but was limited to just five games (one goal, five assists) in the ECHL with Reading before injuries ended his season. Walker did skate with the Phantoms at practice on occasion in the final weeks of their regular season, but didn’t make a return to the lineup before the season ended on April 17.

The Philadelphia Flyers annual summer development camp will be held the week of July 6-13 as first reported by the Philadelphia Inquirer. While the roster for the camp hasn’t been announced just yet, it will feature most of the young prospects in the organization and will likely include several players who have spent time with the Phantoms this past season.