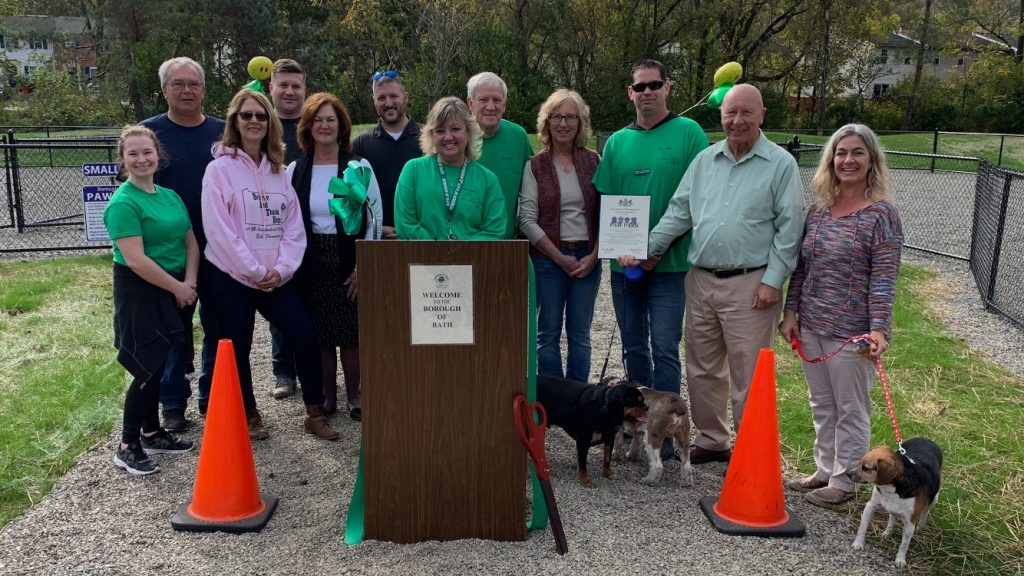 Dozens of Bath residents and their four-legged friends waited anxiously for the ribbon cutting ceremony at Bath’s new Paw Park, the first dog park in the borough. After four years of planning, fundraising, and construction, the park officially opened on Sunday, October 13.

“I do not have many municipalities with dog parks,” said Senator Mario Scavello, who attended the ribbon cutting and awarded the borough with a proclamation. “This is first class.”

The park, located alongside Firefighters Park, is the result of dozens of community residents and businesses coming together. Fundraising efforts included t-shirt sales, basket socials, and concerts. The fences were installed with donated labor by Steve Yost of Tri-Boro fencing. Former councilwoman Cynthia Anderson donated the park’s symbolic tree, which sits between the small dog play area and the large dog play area.

“I am so grateful for the incredible support received,” said Mayor Fiorella Mirabito. “If [this] is not true community dedication, I don’t know what is!”

“Projects such as this cannot be done without community support,” stressed Councilman Mark Saginario.

In addition to the two play areas, four memorial benches have been purchased by the Haldaman Family, the Kumernitsky Family, the Collier/Connolly Family, and the Lamparter/Hoysan Family.

Mayor Mirabito said that the park will be added to as funds become available.

When the ribbon was cut, leashes were off and new friendships were made between residents and their beloved pets.

“We were waiting for this for a while,” said AJ, a Bath resident, as he watched his dog Star happily run around. “[She] is going to be tired. We will be lucky if we do not have to carry her home!”

For Mayor Mirabito, Saginario, and other members of council, a day like the Paw Park opening is what community is all about. More plans are in the works for other events and activities.

“We are trying to upgrade the community with things such as this to get everyone involved,” said Saginario.