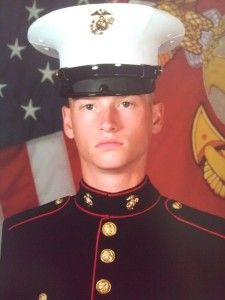 Kevin Garrity, 19, of Bath, began his journey from civilian to Marine April 14 on Parris Island, South Carolina. Garrity graduated July 11 after a grueling three-month experience and will be home for a short ten-day leave before continuing his combat training at Camp Geiger in North Carolina. Afterwards, Garrity will head to Fort Leonard Wood in Missouri to complete his nuclear, biological, and chemical warfare job training.

When asked why he had chosen the Marines over other military branches Garrity said, “I knew the Marine corps would lead me on the right path to providing the kind of life I wanted for my future family, and I chose the Marines for the title of being a United States Marine. When you’re in the army, you say ‘I’m in the army,’ same with the Airforce and Navy, but I now have earned the right to say, I am a Marine.”

As far as what Garrity’s future may hold once he has completed his four years of service, he confidently commented, “I’m just along for the ride.”