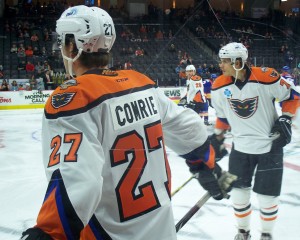 Defenseman Adam Comrie certainly made the most of his Lehigh Valley Phantoms debut Saturday night versus Norfolk.

The Lehigh Valley Phantoms returned from their holiday break and split a pair of games against East Division opponents, which included another exciting finish at the PPL Center on Saturday night with two unlikely heroes.

After a costly 4-2 loss to rival Hershey on Friday night, the Phantoms were up against some adversity heading into Saturday night’s home matchup with the Norfolk Admirals.

Phantoms rookie goaltender Anthony Stolarz left Friday night’s game after an apparent head injury when his head was elbowed by a Bears forward before striking one of the goal posts. Another rookie, recently recalled Martin Ouellette from the team’s ECHL-affiliate – the Reading Royals, took over in net 2:06 into the third period. Defenseman Mark Alt was shaken up after a hit and didn’t return either. Both injured players are listed as ‘day-to-day’ with upper body injuries.

The Phantoms turned to Ouellette to make his first career AHL start Saturday against Norfolk and also called up defenseman Adam Comrie from the ECHL. Ouellette and Comrie made the most of their Phantoms home debuts on Saturday night in front of the fans in downtown Allentown.

Ouellette stopped 33 of the 35 shots he faced through regulation and overtime and all eight shot attempts in the shootout to pick up his first career AHL win. In addition to playing solid defensively, Comrie tallied the lone goal in the eighth round of the Phantoms’ 3-2 shootout win over the Admirals.

“A little nerve-racking at the start but once you get into the game, those nerves go away and you just get in the zone,” Ouellette said of his first AHL start, adding, “It was exciting and always great the first win out of the way right away.”

While Ouellette is in his second stint with the Phantoms, Comrie had just packed his bags and arrived in town for Saturday night’s game.

“It was easy to jump in here and play the system right. Exciting to get the win,” Comrie said, who added he was in awe of the atmosphere at the PPL Center.

“This arena is amazing. It was awesome playing in front of all these fans. People are on top of you screaming and chanting the whole time.”

Saturday’s announced crowd of 8,918 fans was a season and franchise record for the Phantoms at the PPL Center. It was also the team’s last home game of the 2014 calendar year and last home game for nearly three weeks until they return home on January 16 for a Friday night face-off with the Albany Devils.

The Phantoms (14-11-4-1) begin a five-game stretch of consecutive road games starting on New Year’s Eve in Binghamton against the Senators. They then will head down to Norfolk in southern Virginia for a pair of games this weekend against the Norfolk Admirals, before returning home for a week of practice and ending with a weekend stay in St. John’s Newfoundland, Canada for a pair of games against the St. John’s IceCaps on Saturday, January 10 and Sunday, January 11.

You can follow Tony’s live road coverage of the Phantoms New Year’s Eve game against Binghamton on Twitter -> @TonyAndrock_TCG.