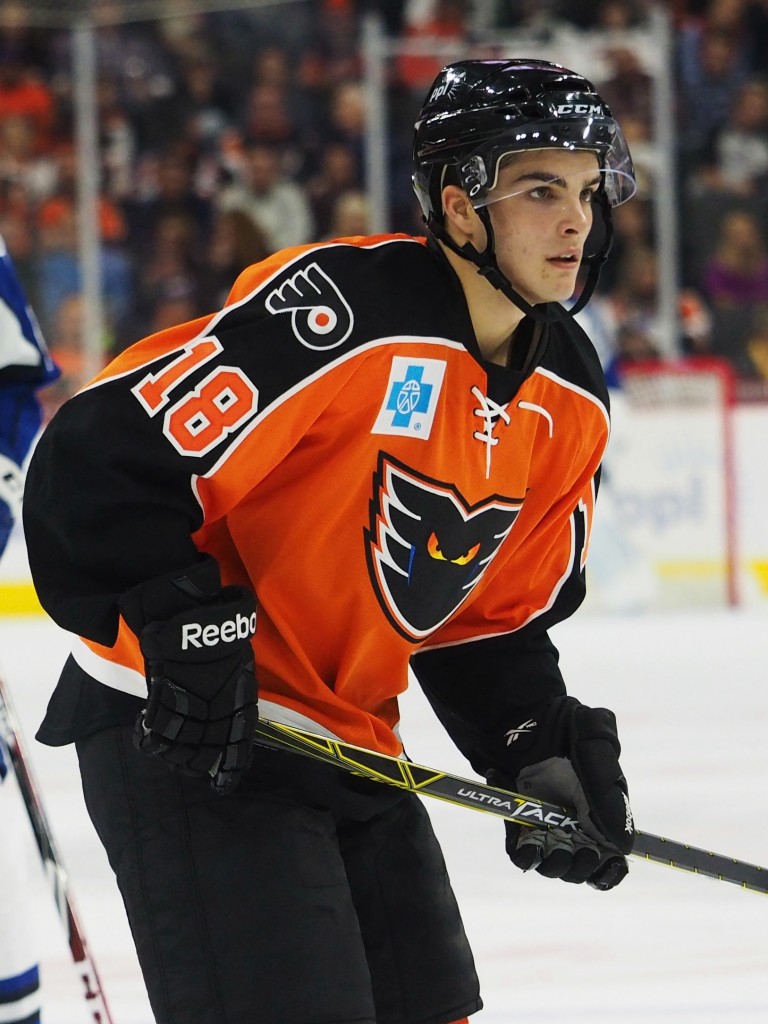 Danick Martel has been fun to watch so far this fall. Phantoms hockey is back! -Photo by Nina Weiss

While the Lehigh Valley Phantoms opened their 2nd American Hockey League (AHL) season with a loss to the Syracuse Crunch on Saturday night, fans at the PPL Center saw a 5-foot-8, 166 pound forward muscle his way to the front of the net and pull the Phantoms within one goal late in the 3rd period – the same undersized forward who was using his blazing speed to blow past defenders in his way and create offensive scoring chances off the rush.

Danick Martel got his feet wet last spring, making his pro debut with the Phantoms back on April 11th. After a five-game taste of the AHL last year saw Martel tally three points (one goal, two assists), Martel comes into the 2015-16 season – his first full year of pro hockey – knowing what to expect and looking to make a name for himself.

“I need to build my place in this league,” Martel said after Saturday’s 4-3 loss to the Crunch. “If I need to be stronger around the net and stronger on the wall, I’ll do it.”

On Saturday night, Martel found himself on the second line alongside team captain Colin McDonald and the Phantoms’ returning leading scorer Nick Cousins. Martel’s speed and willingness to get to the net was prevalent throughout the game, drawing penalties on his opponents and in the third period fighting through traffic in front of the net to get to a rebound and score his first goal of the season.

“He’s got speed,” head coach Scott Gordon said of Martel. “When [he] can get that going, he’s going to have an impact.”

It will be interesting to see how Martel responds to a full season at the pro level, and whether or not he will be able to withstand the physical day-to-day rigors of the AHL. So far, so good for Martel, who appeared in all three preseason games for the Phantoms – tallying two goals and an assist – and tallying a goal and five shots in Saturday night’s regular season opener.

The Phantoms, under new head coach Scott Gordon, will have a week of practice to address their mistakes from their first game before heading on the road this weekend to take on the Springfield Falcons Friday night at 7:00 p.m. ET and rival Wilkes-Barre/Scranton on Saturday at 4:05 p.m. ET.

“The biggest thing is the 3rd period,” Gordon said in his post-game press conference. “We’ll be able to come in and see some video on the way it should be versus what he did in the first and second periods. It’ll be painful to watch the bad part, but the quicker we learn from this the less we are going to have to do it. That will be the emphasis at practice to make sure they understand that there is a reason why we put ourselves in that situation.

You can follow all of the action while the Lehigh Valley Phantoms are on the road by following Tony on Twitter @TonyAndrock_TCG for the latest in-game updates.