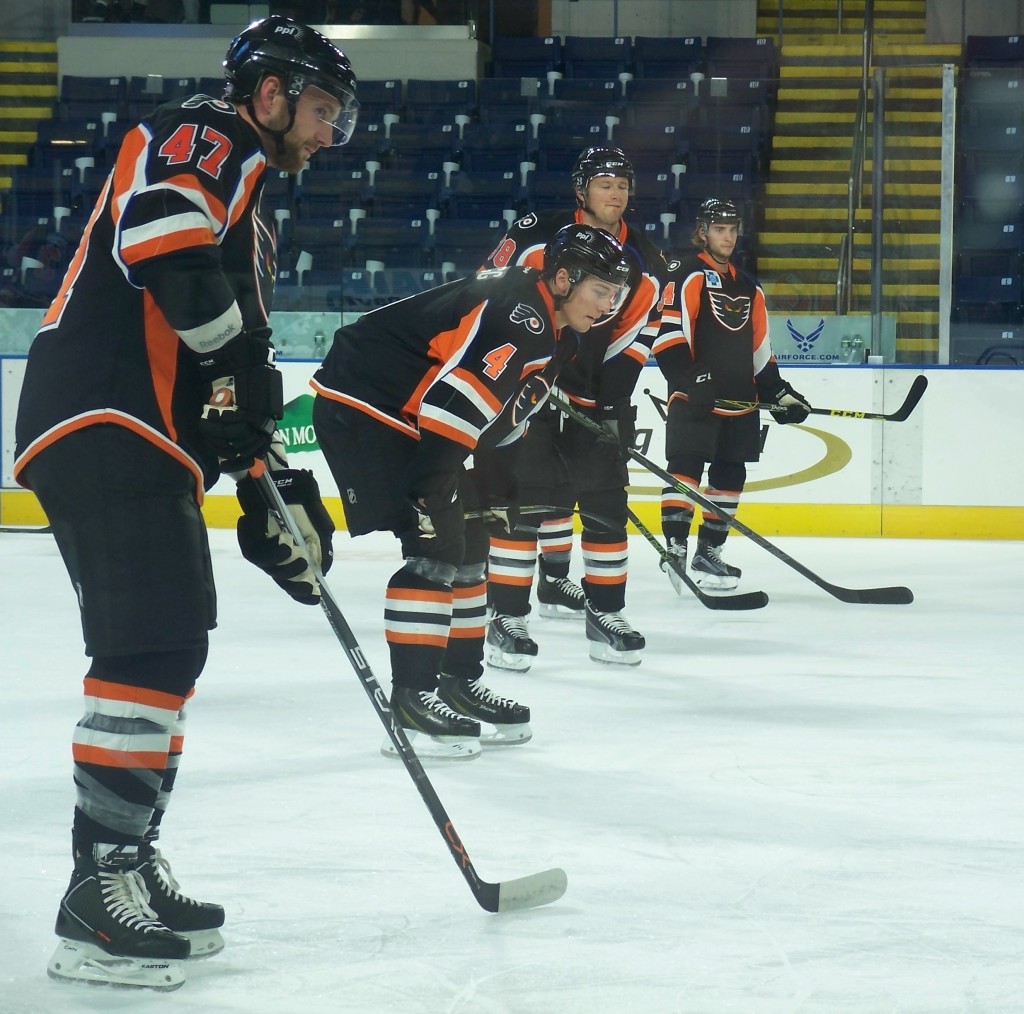 A tough travel schedule with back-to-back games last week turns into a three-game weekend with travel this weekend.

While the Lehigh Valley Phantoms (1-2-0-0) started their first road trip of the season with a 4-1 win over the Springfield Falcons last Friday night, Saturday’s 6-4 loss to the Wilkes-Barre/Scranton Penguins left the Phantoms with six players on the team’s injured list. With a three-game weekend approaching , the Phantoms are gearing up for another road trip starting Friday night in Providence, Rhode Island against the Boston Bruins’ minor league affiliate.

“In two games to lose five players, it’s not an easy hill to climb,” head coach Scott Gordon said after Monday’s practice, talking about the injured players over the weekend in addition to team captain Colin McDonald, who was injured on opening night. “All things considered, it showed a lot about the character of our team to not quit.”

Three of the six injured players – forwards Colin McDonald (out 3-4 weeks) and Michael Parks (upper body, out at least a few weeks) and defenseman Robert Hagg (undisclosed) – have already been ruled out for this weekend’s three games in three nights set. The injuries prompted the Phantoms to add three players from their ECHL affiliate Reading Royals, with forwards Brandon Alderson, Kevin Goumas and Derek Mathers joining the team at practice on Tuesday.

“Unfortunately, it’s part of the game,” alternate captain Tim Brent said about all the injuries. “I think it’s hard on guys when it’s a back-to-back game and you traveled the night before. It might be an issue as to why guys get injured. Those back-to-back scenarios – it’s hard on your body.”

“It’s just one of those things where when it happens you have to adjust,” Brent added. “You have to understand that you’re not going to have as much energy as normal because you’re playing more minutes, and you have to play smarter than we did in certain parts of the game [on Saturday].”

A four hour bus ride last weekend becomes a five hour bus ride this weekend when the Phantoms travel to Rhode Island to take on the Providence Bruins Friday night at 7:05 p.m. EDT. The two teams will then both bus overnight to Allentown, where the Phantoms and Bruins will play each other again Saturday night at 7:05 p.m. EDT, but at the Phantoms’ home rink – the PPL Center – which begins a four-game home stand for Lehigh Valley. The Phantoms conclude their three-game weekend with another home matchup on Sunday evening against the Toronto Marlies at 5:05 p.m. EDT.

Follow all of the Phantoms’ action this weekend on Twitter -> @TonyAndrock_TCG. Pre-game notes, in-game updates and a full recap of the action for all three games will be available online at http://www.highlandparkhockey.blogspot.com