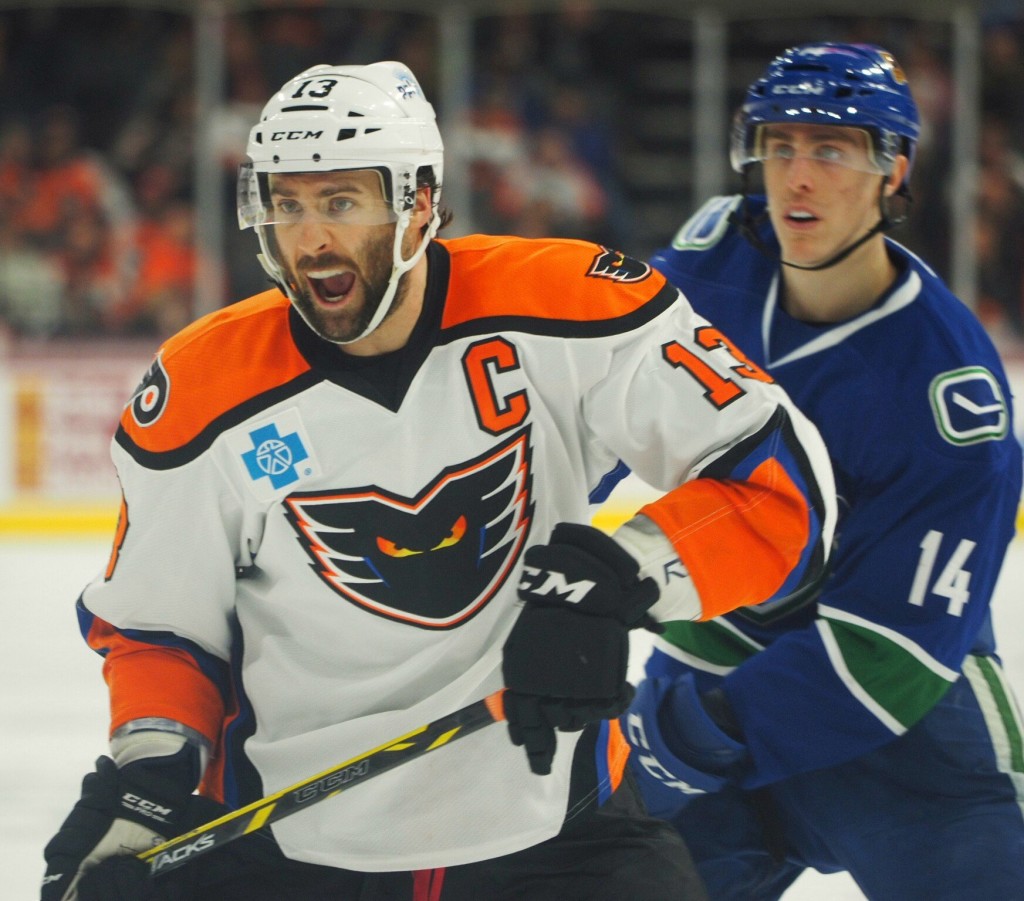 The Lehigh Valley Phantoms (26-26-2-3) have 19 games left on their regular season schedule and remain on the outside looking in in the postseason race toward the 2016 Calder Cup Playoffs.

After back-to-back home losses to Hartford on Friday in a shootout and Utica on Saturday in regulation, the Phantoms playoff chances were fading heading into a must win game Sunday in Hartford. Entering the third period trailing for the third time on the weekend, the Phantoms again managed to make a comeback – tallying two unanswered goals in the final frame to steal a regulation win in Hartford Sunday.

“We definitely have resilience,” assistant coach Riley Cote said after Sunday’s win in Hartford. “I think all around everyone played a solid game and just kept it simple, played hard and found a way to win the game so that’s the bottom line.”

The much-needed win helped the Phantoms keep pace with the teams they are chasing in the Atlantic Division, while also pulling to within one point of sixth place Hartford. Entering this week, the Phantoms’ deficit to what is currently the final playoff spot in the Eastern Conference is six points.

The Phantoms trailed in all three games this weekend, but still somehow managed to come away with three out of a possible six points. If not for a goal against with 4:12 left in the third period Saturday in Utica, Lehigh Valley might have come away with four or even five points.

“I feel like we are just never out of the game. There’s no quit. We just find ways to keep battling back and get points. It was a huge two points for us [Sunday],” Aaron Palushaj said after Sunday’s win. “This was obviously the biggest win of the season for us, especially playing a team we are trying to catch. We are going to enjoy it on the way [home] and get back to business and be ready Wednesday night.”

During Saturday night’s Phantoms game, the Flyers announced that they have signed forward Colin McDonald to a two-year contract extension. While the move gives the Flyers more depth at the forward position, if McDonald doesn’t make the NHL roster next season the Phantoms will retain the services of their captain.

“At this point in my career you just don’t know when your last year is going to be,” the Lehigh Valley Phantoms’ captain said after Saturday night’s loss to Utica. “They approached us about a week ago and I think I have been pretty open about how happy I have been here. Everything from the Flyers to the organization here, it is top notch. I was excited to get an opportunity to play for this organization last summer, and it has lived up to my expectations and even more so.”

So far this season, McDonald has 21 points (11 goals, 10 assists) in 35 games in addition to five games in the NHL with the Flyers this season where he tallied one goal and added seven penalty minutes. In total, McDonald brings 145 NHL games of experience (19 goals, 25 assists) to the table.

“I’m really happy that they were able to do it in this point in the year,” McDonald said of not having to worry this summer about where he would be playing next year. “I think it’s good for both sides and I’m just very happy and very thankful.”

Trade Deadline Passes Without Any Trades

The Philadelphia Flyers were quiet on the NHL’s trading deadline on Monday afternoon. The only move the Flyers made was reassigning forward Nick Cousins to the Lehigh Valley Phantoms, only to call him back up to the NHL after Monday’s 3 p.m. trading deadline pass.

The roster re-assignment was made to make Cousins eligible to play with the Phantoms down the road this season, as by rule any player on an NHL roster at the time of the trade deadline is ineligible to play in the American Hockey League (AHL) down the stretch or in the playoffs. While it’s likely that Cousins will finish the season in the NHL with the Flyers, if the Phantoms make the postseason Cousins would be eligible to join the AHL club after the Flyers’ season ends.

The Phantoms have three games this week, starting Wednesday night in Syracuse against the Crunch at 7:00 p.m. ET. They return home Friday to host the Wilkes-Barre/Scranton Penguins before finishing the weekend with a Saturday night trip to Binghamton to take on the Senators. Both weekend games have a scheduled start time of 7:05 p.m. ET