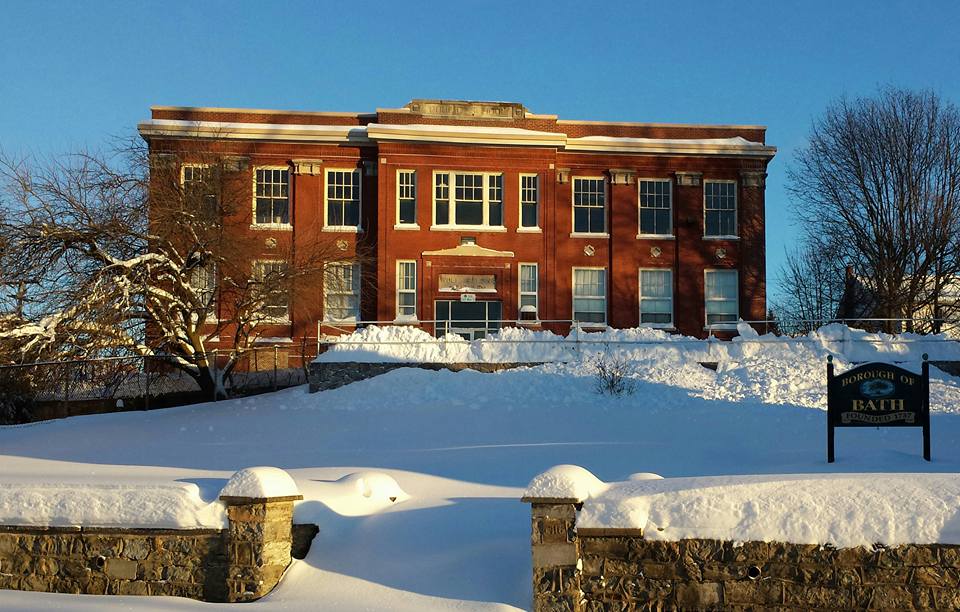 The Borough of Bath Council had a very busy evening on Monday, February 6. Council held its second regular meeting of 2017 and the agenda, like the council chambers for most of the three-hour meeting, was full.

Mayor Fiorella Mirabito opened the meeting by presenting owners of the borough’s Dunkin Donuts with the Guest Royalty Award, which celebrates the establishment’s excellence in customer service, cleanliness and quality of food.

Mayor Mirabito also honored the police and community members who played a role in thwarting a borough bank robbery on January 6. The robber made it only a mile before being arrested by police thanks to a tip from an observant civilian. That witness, Natasha, and Sergeant Chuchran, an officer involved, were also awarded for their service by Taylor Munoz, on behalf of both Representative Marcia Hahn and Senator Mario Scavello.

The award ceremony was followed by a brief presentation by the Lehigh Valley Planning Commission, which last month started a parking study on the borough in order to educate both council and the public on parking and traffic in the downtown area.

Before council considered whether to qualify downtown Bath as a “mixed use” zone, “we needed to get some extra help for problems and solutions,” said Council President Mark Saginario.

Residents in attendance eagerly voiced their opinions on parking, traffic and pedestrian issues in the borough. Among some of the concerns raised during the presentation were downtown parking availability, speed limit violations, slow traffic signals and the ever-present truck traffic.

“There are 53 foot trailers everywhere,” said Councilwoman Carol Bear-Heckman. “They drive on the sidewalks. They take our porches, poles and trees.”

A survey in which residents could add their say was distributed at the meeting. A link to the survey will also be available on the borough’s website.

Mayor Mirabito also issued a proclamation during the meeting, naming April 2017 as “Pennsylvania 811 Safe Digging Month.” As the proclamation states, workers are injured, utility lines damaged, and pollution caused when residents dig and excavate without knowing where their utility lines are located. The proclamation urges all residents who plan on digging up any piece of their property to call 8-1-1 three days prior to starting their project to prevent the damage, danger, and harm that digging can cause.

Perhaps the most pressing issue of the night, however, was the new municipal building and the future of the Bath Museum, which has called the current municipal building home since it opened in 2000. The issue of the Bath Museum’s future location had been in question since late last year when the borough announced it would be moving to the Thirst Quenchers building on South Walnut Street.

Original building plans had no space for the museum. However, the borough’s municipal building design and construction committee worked together to come up with a solution. The plans presented at the council meeting were the result of “eleven or twelve” drafts. Showcasing the plans, the committee explained how the building’s current car park will be enclosed, freeing up room in the front of the building for the museum. While the space would be sufficiently smaller than before, the committee broached the idea of displaying the wealth of historic artifacts throughout the municipal building—in display cases along the walls and hanging from the ceiling, in addition to a set of glass doors that will allow visitors to peer into the museum even when it is closed. In a way, the history of Bath will be surrounding all who enter the new building.

“It was not an easy decision for us,” Saginario, who is also on the design and construction committee, said when museum representatives and members voiced concerns that the revised plan still would not provide them with enough room for their expansive collection. “Everyone in the borough is going to have less room…[However] this is not…the finished product,” he continued. “You have to start somewhere.”

Ed Pany, founder and curator of Northampton’s Atlas Cement Company, was in attendance and voiced his support for the museum, calling it a “treasure that is the envy of some communities.”

It was an opinion that council agreed with and repeated throughout the night.

“I have always commended the museum for the work they have done,” said Mayor Mirabito. “Please do not think this council is not doing all they can.”

The borough can bring the museum to the new municipal building, but it cannot build an addition to the new building in order to store the artifacts, what some museum members hoped the borough could do. Doing so, council explained, would mean raising taxes.

“I have got 3,000 residents we have to keep happy,” Saginario said.

Perhaps the best course the museum can take as of now, council believed, is to become a 501(c)(3), which would enable the organization to pursue the grants and funding it needs to sustain and perhaps even expand itself.

Council ultimately approved the conditional plans for the new building, making room for minor changes by the committee. However, it does not appear that discussion surrounding the museum will be waning any time soon.

Yet council, and especially Mayor Mirabito, want the museum and its members to know that they are on the same side.

“No one here wants to get rid of the museum,” she stressed.