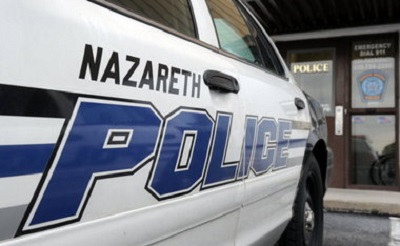 Multiple storylines surfaced at Nazareth Borough Council’s March 30 workshop meeting, with the police department taking center stage as they prepared to unveil newly-designed patches, symbols and uniforms for their department while looking to implement new technology in their police cars.

In the police committee report, Councilman Carl Fischl noted that council has around $10,000 left over for technology-related upgrades for the police department. “We’re going to need approximately $4,600 to $4,800, and we’re hoping everyone would be in agreement to split it with the technology and the police,” Fischl said.

“We’re going to put that $10,000 toward the purchase of new bright system computers for our four patrol cars,” Councilman Brian Regn said. “The nice thing about these computers is that the officers will be able to just swipe the driver’s license and registration card into the computer. Basically, everything will be already filled in on the blanks so they can do a quick check of the status of the person or vehicle really quickly.”

According to Regn, $2,310.18 will come from the technology budget, with the police committee budget paying the other half of the bill. Regn also said that installation costs outweigh the costs of the computers themselves.

Nazareth Police Commissioner Randall Miller said the system is reasonably priced, and it will considerably reduce the amount of time spent logging information at various scenes.

“The amount of time it will save will be staggering,” said Miller.

Also of note from the workshop meeting was the development that Keller Zoning will not be submitting a bid to continue as the borough’s zoning and code enforcement officials.

Zoning Administrator Dennis Huth said it was clear that the borough was not completely satisfied with Keller Zoning’s work.

“We don’t want any controversy, any debate, council obviously wasn’t happy with something, and that’s fine, that’s your option to go out to bid,” Huth said. “On a personal level, I’m at a point in time where I’m going to focus more on building code.”

Huth said building code is directly linked to his previous work experience, as he has a background in electrical engineering.

“I grew up in town here, I graduated from the high school, I bleed blue, and I will continue to bleed blue,” Huth said. “I know that I’ll be leaving your borough safer; I’m sure of that.”