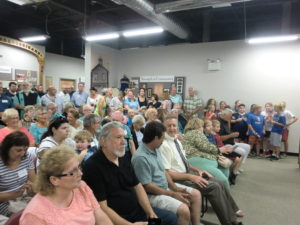 ceremony on Monday, August 6. Council members and mayors of past and present were in attendance, as were state representatives, members of the Greater Lehigh Valley Chamber of Commerce, and even Northampton County District Attorney John Morganelli.

The new borough building was completed by nearly 90 percent volunteer work, something Liz Weaver of the Chamber of Commerce called “unbelievable.”

State Senator Mario Scavello called the building “the nicest and newest” in the area. It features brand-new technology, a custom-crafted dais, and several historical galleries curated by the Bath Museum.

“[There is] 275 years of history on your walls,” continued Senator Scavello.

The names of the volunteers and local businesses who dedicated over a year of their lives to the new building will forever be inscribed in a commemorative plaque hanging in the building’s lobby.

“[You have] rightly earned the respect and admiration of friends and colleagues,” they told Flynn.

“We called everyone we knew and this group of people just came together,” said Saginario.

“This facility today…is a tribute to the folks here,” said D.A. Morganelli.

In addition to the ribbon cutting, Senator Scavello and Representative Hahn presented a 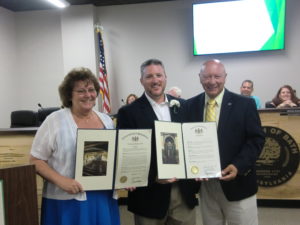 Certificate of Recognition from the Commonwealth of Pennsylvania to the borough. There was also a special musical performance of “The Star-Spangled Banner” by incoming fourth graders at Sacred Heart School.

The evening truly was a community affair, one the borough was eager to share with residents and one Mayor Mirabito could not help but praise for helping make Bath “this beautiful borough I am so very proud to call mine.”