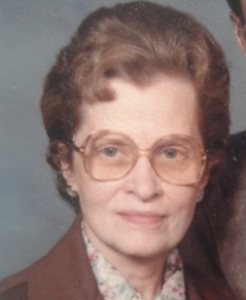 She was a graduate of Northampton High School, class of 1945. Gloria was a loving wife, mother and homemaker for most of her life. She worked for some time as a seamstress in the garment industry, before retiring and enjoying many years of grandparenting with her husband, Lewis, who passed away in 2010. Gloria was a member of Dryland United Church of Christ, Nazareth, and spent the last nine years in her home with the loving company of her eldest son, Allen C. Borda. She loved her Lord Jesus, and her prayer, in recent months of illness, was to be with Him and her husband, Lewis, in Heaven.

Services: A private graveside service will be held in St. Peter’s Snyder Church Cemetery, Seemsville. There will be no calling hours. Arrangements are under the care and direction of the George G. Bensing Funeral Home, Inc., Village of Moorestown – Bath.

Contributions: In lieu of flowers, contributions may be offered in memory of Gloria to the Alzheimer’s Association, P.O. Box 96011, Washington, DC 20090-6011.

Viola L. Gower, 88, formerly of Bath and Moore Township, passed away peacefully on Wednesday, April 3, 2019, at the Moravian King’s Daughters Home in Bethlehem. She was the wife of the late Carl C. Gower, with whom she shared 44 years of marriage prior to his 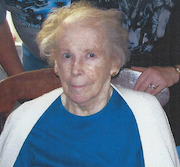 passing in 1996. Born in Plainfield Township, on Jan. 31, 1931, she was the daughter of the late Arlington C. and Esta M. (Abel) Watson. She was a graduate of Nazareth High School, class of 1948. Viola worked at the former Keppel’s IGA in Bath, for 16 ½ years until 1984. She then worked at the former Cement National Bank in Bath, now PNC Bank, for several years. Prior to her retirement in 1993, Viola worked in the Bookkeeping Department at the Lafayette Bank Operation Center in Hanover Township. She was an avid league bowler and, in later years enjoyed golfing with her husband. Viola was a member of St. John’s Evangelical Lutheran Church, Bath.

Survivors: She is survived by her daughter, Wanda Frey and her husband, Terry, of Moore Township; sons, Gary Gower, Sr. and his wife, Gail, of Delaware, and Ricky Gower and his wife, Regina, of Bath; seven grandchildren; thirteen great-grandchildren; sister-in-law, Carol Butt, of Port Orange, Florida; nieces and nephews. In addition to her late husband, Carl, she was predeceased her brother, Chanola F. Watson, and a nephew, Jeffrey S. Watson.

Services: A funeral service was held on Saturday, April 6, 2019, at 10 a.m. in the George G. Bensing Funeral Home, Inc., 2165 Community Drive, Route 946, Village of Moorestown – Bath, PA 18014. Friends and relatives are invited to call on Friday evening from 6 to 8 p.m. and Saturday morning from 9 to 10 a.m. in the funeral home. Interment will follow in Fairview Cemetery, Moorestown.

Rev. Daniel E. Lundmark, 75 of Northampton, PA. went home to be with the Lord on 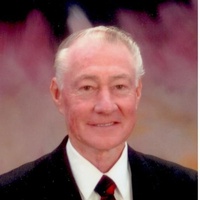 Sunday, March 31, 2019, at Lehigh Valley Hospital Center in Allentown, PA. Born Feb. 24, 1944 in Harvey, Illinois, he was the son of the late Alfred Lundmark and the late Lucille (Foreman) Lundmark. He was the husband of Nancy J. (Klase) Lundmark with whom he shared 54 years of marriage last June 13, 2018. Pastor Lundmark joined the Assemblies of God in 1968. He began pastoring Northampton Assembly of God on Dec. 29, 1968. He was ordained as an Assemblies of God Minister May 6, 1974, and has been the Senior Pastor for the past 50 years. He was first an assistant Pastor for the Miracle Revival Church in Lykens, PA. for four years. His care, compassion, and faith commitment throughout the past 50 years has enabled him to build a wonderful strong Church and Congregation in Northampton. Pastor Lundmark was also known for his writings, “The Pastor’s Comments” article which have been published weekly in several local newspapers for the past 40 years. Surviving along with his wife Nancy are son, Samuel P. Lundmark and wife Ileata of Brownsboro, TX, daughter, Melody J. Lundmark of Northampton, PA, brothers, David and wife Lisa, Peter and wife Cathy, and Joseph, all of Bradley, IL, James and wife Linda of Martinton, IL, and Paul and wife Gleneva of Kankakee, IL, Sister; Rebecca McLaughlin of Cleveland, TN; Sister-in-Law, Grace Lundmark of Whitehouse, TX, four grandchildren: Nathan, Isaac, Aaron, and Lilyan and nieces and nephews. He was predeceased by a daughter; La Donna Joy, brothers; John and Timothy, and sisters; Lois and Kathryn. A funeral service was held at 10 a.m. on Thursday April 4, 2019 at Northampton Assembly of God, 3449 Cherryville Road, Northampton, PA. 18067. The family received friends at the Schisler Funeral Home, 2119 Washington Avenue, Northampton, PA. 18067 on Wed. April 3, 2019 from 6 to 8 p.m., and 9 to 10 a.m. on Thursday, April 4, 2019 prior to the service. Interment followed services in Fairview Cemetery, Northampton, PA. Contributions: May be made in his memory to Bright Hope Pregnancy Support Centers, Allentown Rescue Mission, or the Salvation Army all C/O the funeral home.