The Bath Farmers’ Market held their first farm to table dinner event last Friday evening during the usual market hours from 5 to 7 p.m. 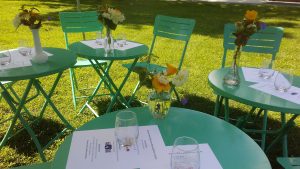 The dinner, prepared by Chef Todd of Estelle’s Catering, had five courses and each one featured key ingredients supplied by vendors from the market.

It began with an appetizer of plantain chips with cilantro dipping sauce and sundried tomato sourdough bread with fresh butter and olive oil from Nazareth’s bakery Sweet and Savory. The bread course was followed by a caesar salad that included lettuce from Twin Maple Farms. The m 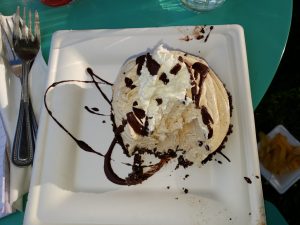 Market manager Sarah Fulton and steering committee member Carol Bear-Heckman were the servers for the evening. 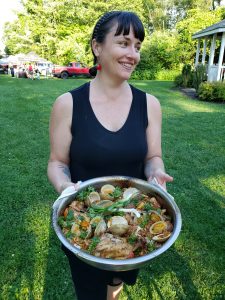 The concept of farm to table has gained popularity in the past ten years. The idea of using fresh ingredients from the region not only promotes local businesses and community farms, but gives patrons a glimpse of what products are available right in their own backyard.

The dinner was a sold out event, attended by approximately 25 guests and musical accompaniment was performed by Bath’s own Bobby Siegfried, who performed a range of hits from the past four decades.

At this time the future dinner schedule is unknown, however at least one more dinner will be served before the end of the season.