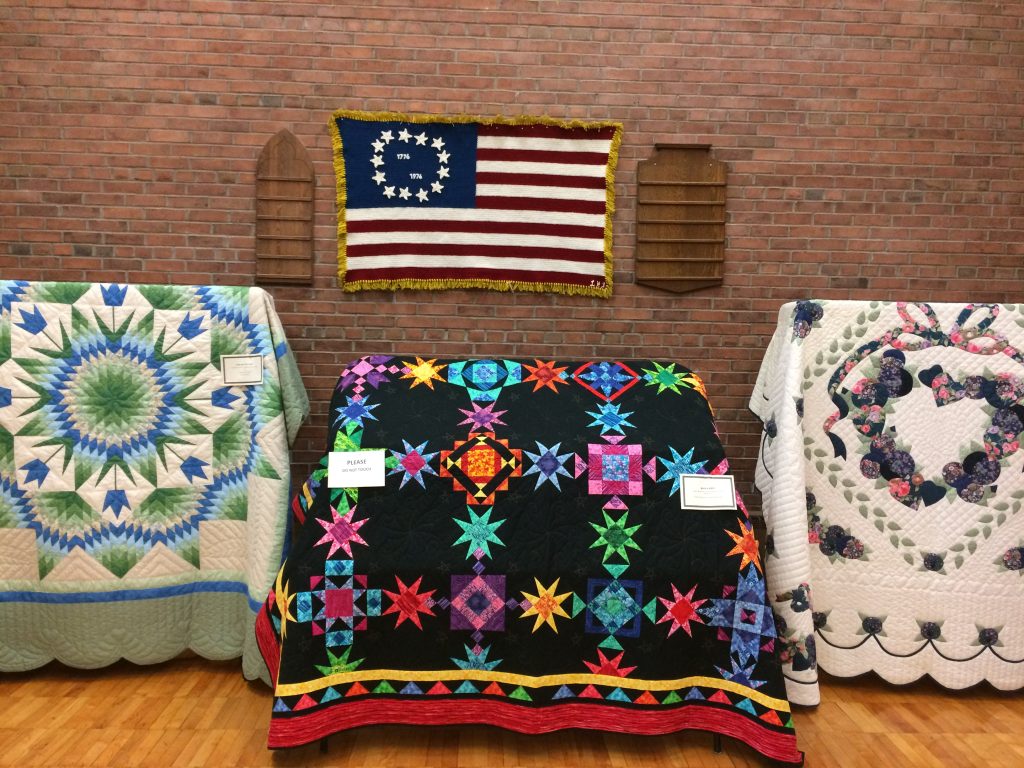 Over 75 quilted items were on display at Christ Church of Bath’s Fourth Annual Quilt Show held on Saturday, September 28. These quilts, some hand-sewn and others made by machine, some new and others more than a century old, each had a unique story to tell.

“Personality is put into each stitch,” says Sharon Schrantz, coordinator of the quilt show.

With two rooms of quilts on display, 2019 marked the largest quilt show in the event’s four-year history. And not a single quilt has been repeated, showing just how diverse this beloved art form can be.

The oldest quilt on display was from the mid-to-late 19th century. Called the “Crazy Quilt,” it features a variety of fabrics patched together, each patch surrounded by decorative embroidery that has been sewn by hand.

Another quilt from the 1940 or 50s was made of feedbags with their corners sewn together. Yellow daffodils transformed what were once dull bags into something warm and inviting that someone would want to wrap around themselves on a cold winter night.

Each quilt, made or owned by a resident of Northampton County, showcased different colors, different patterns, and different purposes. Large rail fence quilts and embroidery quilts emulated warmth. Small quilted tablecloths brought back memories of family dinners. A diaper bag, quilted by Schrantz herself based off a pattern from the mid-1900s, showed how patterns, traditions, and what’s more, love, could transcend generations.

Schrantz says that someone unfamiliar with quilting may simply see the similarities between the pieces. But for those who have grown up around the hobby and have come to love it, they see something more.

“The person who makes [the quilt] makes it unique,” she says. “They are a piece of love.”

Northampton County resident Jerry Roth had several pieces on display. All of his quilts are intricately hand-stitched, the length between each stich precise. He learned to quilt from his grandmother at the age of nine, Schrantz said. Nearly seven decades later, he continues to bring to life the tradition his grandmother taught him.

Schrantz did not expect the popularity of the quilt show to grow as it has over the past several years. This year’s show gained more visitors in its first few hours than the event did in its entire first year. She is looking forward to a fifth quilt show in 2020.

“That we are even at year four blew me out of the water,” she says.

She also has plans for a possible textile show, which she anticipates will be an even larger exhibit of hand-sewn items continuing to tell stories of family, tradition, and love.