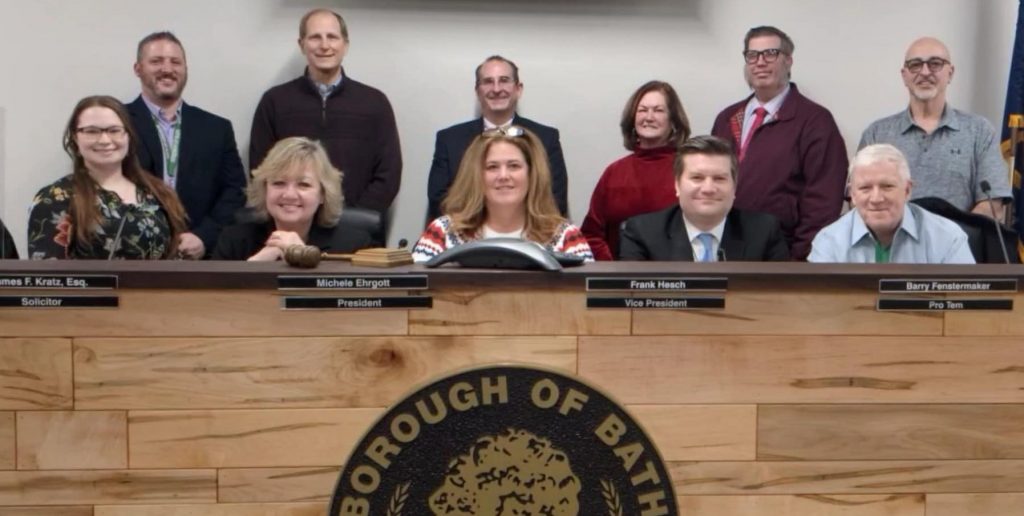 The Bath Borough Council reorganization meeting was held on Jan. 3, 2022. During the first meeting of the year, three new councilmen and one returning councilwoman were sworn in by Mayor Fiorella Mirabito. Mirabito is entering her third term as mayor, having won reelection in 2021.

In addition to swearing in Lisiecki, Hamadyk, and Ehrgott, Mayor Mirabito had the opportunity to swear in someone very special. Her husband, Manny Mirabito, was also sworn in as a councilman during the January 3 meeting.

Mirabito will fill the seat vacated by former Councilman Mark Saginario. Saginario resigned effective December 31. Mirabito submitted a letter of interest to the borough and will be completing Saginario’s term until the end of 2023.

This is not the first time Mirabito has sat on borough council. He previously served as council president in the 1990s.

“I think Manny is going to be a great addition to this borough because of his experience,” said Councilman Barry Fenstermaker.

Mayor Mirabito, Ehrgott, and Borough Manager Brad Flynn all thanked Saginario for his decade-plus of service and wished him well on his new journey as borough manager of Tatamy.

“Whether we agreed or not, he put in the time,” added Mirabito. “That alone is a big thing….Mark did a lot for the Borough of Bath in his 12 years.”

“He got me a start here, and he has been there for me,” he said. “I really thank him and appreciate all he has done for me over the years.”

Mayor Mirabito thanked the new members of council for their service and commitment.

“I am glad that they stepped up [and] that they ran for office,” she said. “They are going to see a different side of why things are the way they are.”

“Get ready,” she continued. “You are going to get a really good lesson. You are not going to make everyone happy, but that is okay.”

Council isn’t the only governing body undergoing a switch up.

The planning commission also has two vacancies. Both Allen George and Andrew Ehrgott resigned. Meanwhile, Manny Mirabito resigned from his post on the Zoning Hearing Board due to his new position on council. Ehrgott was appointed to fill his position.

The next Borough of Bath Council meeting will be on Monday, February 7 at 6 p.m. During that meeting, Mayor Mirabito will be honoring Spengler Law for 70 years of business in the borough. A bi-monthly council meeting is scheduled for Wednesday, February 9 at 6 p.m.