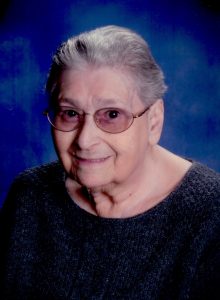 Joyce F. (Lewis) Kline-Sterner, 88, of The Hampton House, Northampton, died peacefully Saturday morning, Feb. 19, 2022, at Lehigh Valley Hospital, Muhlenberg Campus, Bethlehem. She was the wife of the late Charles W. Kline who passed in 1963, and the late Richard H. Sterner who passed in 1998. Born in Northampton, she was a daughter of the late Chester and Lillian (Muth) Lewis.

Joyce was employed by the former Acme Supermarket, Whitehall. Later, she worked at the former Catherine’s Stout Shoppe, Whitehall Mall. She was a member of St. Paul’s United Church of Christ, Northampton. Joyce was a 1951 graduate of Northampton High School. She was an avid bingo player, she enjoyed crosswords, reading, and family camping trips. Joyce volunteered as a member of the tenants association. for the Hampton House high rise for many years.

Contributions: To a charity of one’s choice.