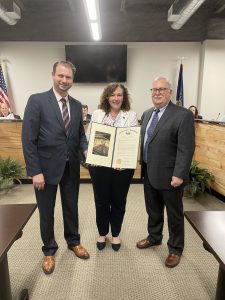 Spengler Brown Law Offices has helped residents and businesses of Bath with their legal needs for over 75 years. The practice was founded in 1946 by Elias Spengler, a Bath native who opened the practice after returning home from serving in World War II. Elias ran the law practice for over 40 years until his death, at which time his son Dan Spengler took over the business and continued his father’s impressive legacy.

It was this legacy, 75-years-strong, that Bath Borough Council, Mayor Fiorella Mirabito, and State Representative Ann Flood commemorated on Monday, March 7. Dan Spengler and his partner Steve Brown, who joined the practice in 2021, were present to accept the citations from council and the PA House of Representatives.

“I have always considered Bath my home,” said Spengler. “It is an honor, and I know my father would be proud if he were here.”

“I look forward to continuing with the legacy Dan’s father [started],” added Brown, who was also surprised with a round of “Happy Birthday” by members of council and the public.

“Thank you both for all that you have done here in this community,” Representative Flood said while presenting her citation to the legal team. “Seventy-five years here is a huge amount of time. I know you’re going to try for 100 years!”