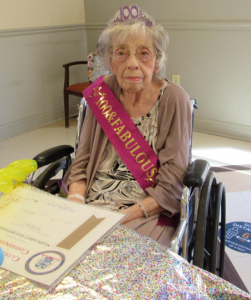 On Saturday, August 13 in Easton, family and friends gathered to celebrate the 100th birthday of Margaret Halbfoerster.

For 18 years Margaret owned and operated the bakery Margie’s Bake Shop, which was located on Airport Road. Family members, some of whom traveled from New Jersey for the milestone, arrived with baked goods honoring this family business such as butterscotch brickle, blueberry buckle cupcakes, and a variety of other recipes of Margie’s Bake Shop that have been passed down through generations.

Easton Mayor Salvadore Panto Jr. was also in company at the party, arriving with flowers and a commemorative certificate for the birthday gal. When wishing to see her next year, she replied with “I hope not,” a shining example of the humor and quips Margaret is said to be known for by family.

Margaret was described by her niece as a hard worker her whole life, corroborated by both the centenarian’s own endeavors as well as those who have been in her life. The late Bill Halbfoerster Jr., former owner and longtime editor of The Home News, was cousins with Margaret’s late husband Fred Halbfoerster.

Everyone in attendance was extremely grateful for the chance to celebrate such a milestone despite restrictions set by Covid-19.

“Oh my god, it’s a blessing,” Margaret remarked several times, adding that she never believed she would make it this far as the oldest member of her family.