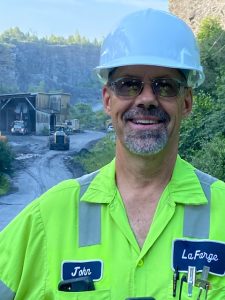 Mr. John Hish was born in Bally, graduating from Boyertown High School in 1982.

He recalls, “My mother gave me three choices: the military, college or trade school, so I enlisted in the Navy in 1982.”

John received basic training in Orlando, FL. and Great Lakes Training Center as an electrician mate, being assigned to the U.S.S. Shenandoah, a destroyer tender with a crew of 1500 and sailing on the ship’s maiden voyage.

He remembers, “One of my great memories was sailing through the Panama Canal.”

The ship was a repair ship, equipped with a full machine shop to repair ships when required.

His tour of duty ended in 1986. He used his electrical skills at Electric Motor & Supply in Lancaster. In 1990 John joined Standard Electric and worked on motor vibration and laser analytics.

During his employment at Standard, he was sent to Lafarge to work on their electrical components and became very knowledgeable on the plant’s operations. As a result, Mr. Hish was hired as maintenance inspector by Lafarge. He works to ensure the plant operates efficiently and safely.

When the plant opened a recycling plastic operation, he was named fuel coordinator. Plastic and tires help fuel the plant.

Mr. Hish is very amiable with a friendly personality. He is a dedicated cement worker who has pride in a plant that has been in Cementon for 120 years. John has been married to the former Angela Sharrow for 27 years and they are proud of their children Joshua, Mariah and Noah. The friendly family resides in Bally.

We wish continued success to Mr. Hish and all our friends at the century-old plant.