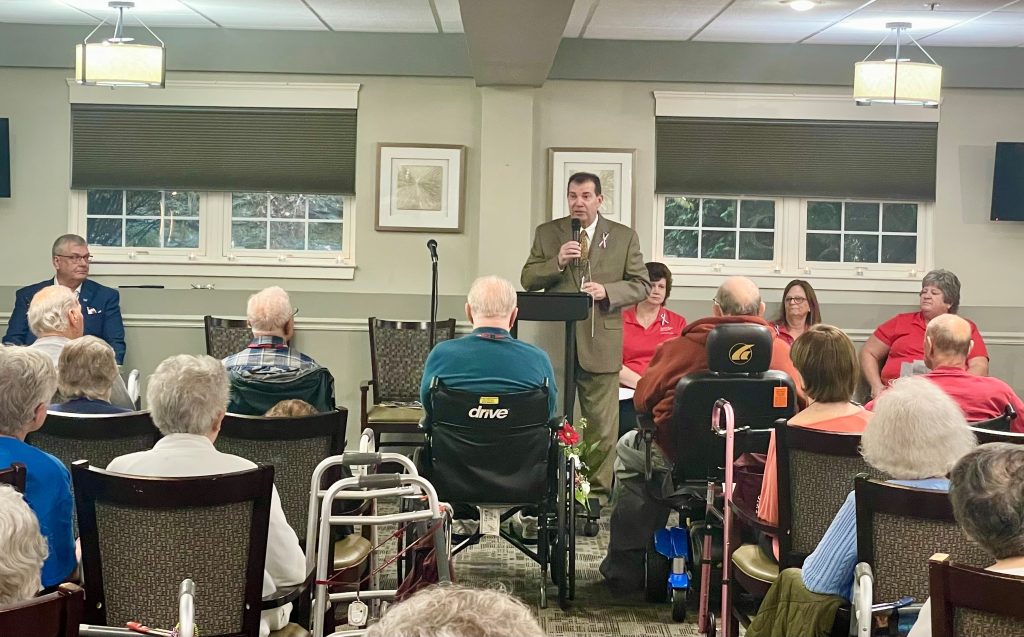 Sacred Heart Assisted Living Activity Director Lisa Schmidt began the ceremony by thanking the veterans that reside at the facility for answering the call of duty.

“The veterans we honor today came from all walks of life, but they share several fundamental qualities: Many of them didn’t ask to leave their homes to fight in distant battlefields–many didn’t even volunteer. They didn’t go to war because they loved to fight, they were called to be part of something bigger than themselves. They rose to the nation’s call because they wanted to protect our nation. Today, people throughout the country will gather together to remember, to honor, and to pay gratitude to those who have served our country. Our gathering is just one spark in the flame of pride that burns across the nation today and every day. It’s not a lot, but it’s one small way we can honor those who have made the ultimate sacrifice so that we can live in freedom,” said Schmidt.

Anthony Fetterhoff provided the musical selections during the ceremony with his renditions of the “Star Spangled Banner,” “Battle Hymn of the Republic,” “God Bless America,” “America the Beautiful,” and “My Country tis Thee” as residents and visitors sang along.

Army veteran and Sacred Heart Assisted Living resident Joseph McHale also sang a beautiful rendition of “Bring Them Home,” which captivated the audience and brought quite a few to tears. He dedicated the song to “the men and women that have given the utmost sacrifice to keep our country safe, to keep the people safe, and to keep our freedom safe.”

Mayor Pristash thanked the veterans at the ceremony for their selfless service to our country, everything they endured for our country’s defense, and the freedoms they fought for while presenting the veterans with slate coasters for their residences.

“Today, these gentlemen and the men and women like them who have given to our country, I give a heartfelt thank you on behalf of all the residents of the Borough of Northampton. Thank you for your selflessness, for your courage, for your grace under pressure, and for bringing your stories back here to share with us, so that we may learn to appreciate your sacrifice,” Pristash expressed.

Reverend William J. Ritzenthaler shared his gratitude for veterans and prayed with them along with attending residents.

“President Truman once said our debt to the heroic men and valiant women and the servants of our country can never be repaid. They have earned our undying gratitude. Truman’s words reign true as we celebrate the sacrifices of those who have served to protect our great country. Veterans Day honors those who have served in the United States military. And it’s celebrated with dignity and honor to you all. The people gathered here today and the community around us would like to thank you, those who have served, especially the men that are before us today. Our country, on this day, always, we want to thank our veterans for giving their spirits, their lives, and their acts of selflessness to keep our nation free and safe because of their bravery,” Ritzenthaler proclaimed.

“Thank you for honoring our veterans today. Let us walk toward tomorrow, still honoring them by living in the freedom that they protect,” Schmidt observed.

In closing, the activity department presented the veterans with hand carved wooden plaques that read “Veteran – Proudly served with honor.”