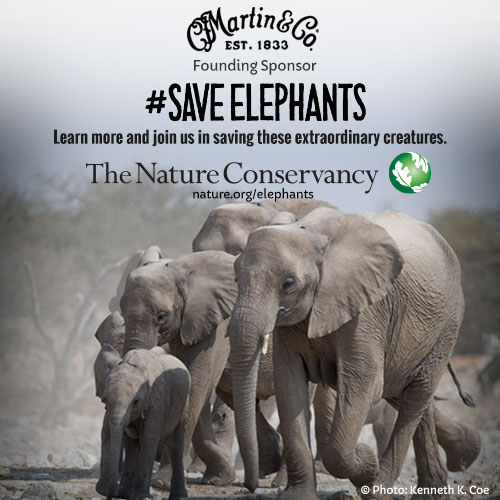 In 1980, an estimated 1.2 million elephants roamed Africa. Today, that number has tragically dwindled down to a mere 430,000, with approximately 20,000 being killed each year.

These staggering statistics recently caught the attention of Christian Frederick Martin IV, CEO of Nazareth’s own musical gem, Martin Guitar. “I started to pay attention to the information that was coming out of the media about the declining number of elephants and the poaching and the extraordinary amount of ivory coming onto the market in China,” said Martin. “I decided to look into it.”

Martin Guitar had been using ivory in their guitar construction for years, mainly for two pieces called the nut and the saddle. “It’s where the strings start and stop,” explained Martin. “Where the vibration is transferred and secured. It’s the beginning of tone generation. It’s beautiful and durable; that’s why it was used for guitars.”

In the ‘60s and ‘70s, they started phasing out its usage and switched from elephant ivory to preserved mammoth ivory in the late 1960s.

“Some enterprising people went into the tundra and uncovered these petrified mammoth tusks. They had a funky look to them, but they were still ivory,” Martin explained. “This was pre-CITES, but even so, these animals died years ago. Through different sources, we realized it was a pretty cool alternative.”

CITES is the Convention on International Trade in Endangered Species of Wild Fauna and Flora, which acts as “an international agreement between governments. Its aim is to ensure that international trade in specimens of wild animals and plants does not threaten their survival.” Which should spell protection for the elephants, but clearly hasn’t done much to deter poachers from going after them anyway.

Martin Guitar eventually decided to stop using the preserved mammoth ivory as well, for a clean break from the trade.

“The fear is, somewhere down the line, you don’t really know where it’s coming from,” Martin said. “Someone could take a new tusk, make it look old, bury it for a while, and then try to market it. And that’s very disappointing, because it was a way for us to more authentically make replicas. Consumers were disappointed, but just to be safe, we said, we’ve got to stop.”

Recently, Martin remembered a hang-tag stating their position on ivory usage that had been placed on their guitars around the time of the phase-out and dug one out of their archives.

“I thought, my goodness, even back almost 40 years ago, the company made a very bold statement: we’re done,” he said. “And I thought, 40 years later and there’s still a market for ivory when, in fact, it’s been at the top level of CITES for a long time. And I thought, this just isn’t right.”

“In this day and age, the elephant’s such a majestic animal,” Martin continued. “I’ve been reading about them and they’re very gregarious. They don’t like hanging out by themselves. They live in little societies and if one is killed, the rest go into mourning. It’s emotional, thinking about that.”

Martin hopes their confident stand against the ivory market will encourage people to think about where certain materials originate.

“It sure seems like there has to be a lot of fuss and bother in the media to get people’s attention. That’s what got my attention,” he said. “The fear is that the population will decline to the point where they’re no longer in the wild, they’re just in zoos. And this was the concern back when we first had that hang-tag. That’s what appalls me; there’s been no change.”

Enter The Nature Conservancy with a plan. The partnership initiation with TNC was a “perfect storm,” according to Martin Guitar’s Vice President of Brand Marketing, Amani Duncan. Martin’s public relations agency, Dan Klores Communications in New York, was working with The Nature Conservancy and connected the two. TNC had been working behind the scenes for years on their African elephant initiative and were just getting ready to launch. “Because of our conjoined histories with this cause, it was a perfect marriage because it comes from a place of credibility and authenticity,” said Duncan. “We also wanted to make sure we married ourselves to someone with the muscle to actually do some really profound work and make a mighty voice.”

“They saw our hang-tag and they said, hey, here’s a company who used ivory and stopped and we’d like to partner with them,” said Martin. “I don’t want to be arrogant about this, but the Martin brand is very well-known. So they said, it’s a high quality product and they seem to be ethical, this could be beneficial to us.”

“There wasn’t yet a guitar manufacturer that was making a stand,” Duncan explained. “So we said, you know what, we believe in this; this has been our truth since the late 1960s.” 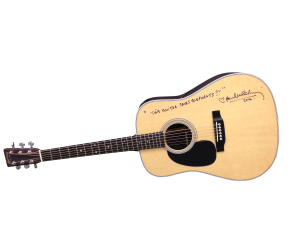 Martin Guitar became the founding sponsor of the TNC’s Save Elephants campaign, which they jump-started with an auction; a left-handed D-28 signed by Sir Paul McCartney sold for $50,000 in 15 minutes.

“Artists have become leery these days of signing guitars because they usually all end up on eBay. He knows his signature is valuable, and he’s behind it, which is great,” said Martin.

According to Duncan, this campaign is all about raising funds, which will go directly to whom she calls the “boots on the ground.”

“They’re the people fighting the battle every day,” she said. “They’re like the elephant SWAT team, the elite force patrolling in Africa. Their lives are in danger every single day, going up against these poachers. 20,000 elephants slaughtered a year is heartbreaking. These animals are in protected environments and poachers are going in there anyway. It gives me chills just thinking about it.”

Their efforts have not gone unnoticed. “We got a nice video clip from a bunch of folks in Africa saying, Martin Guitar, we thank you for the partnership and the financial support—so they can keep an eye on the elephants and let the poachers know they’re watching,” said Martin.

It will take at least a year before they start to really see the impact of their efforts.

“20,000 elephants are killed per year, that we know about,” said Duncan. “That’s just in Africa; we haven’t even begun to tackle India. When we start to see that number decrease, that’s when we’ll know.”

“I do believe that there is power in numbers, but you also can’t be everywhere and do everything. It can be a very daunting prospect when you think about it,” Duncan admitted. “I say you always have to think about the why—why do we do this, why do we buy this—and when you take a step back, why we’re doing this is to change a cultural system. They’re impoverished and desperate; desperate people do desperate things. We have to put in resources to change their economic environment, so that these senseless crimes against animals are not an option. It’s overwhelming; we have to change an entire mindset, one step at a time. We would feel defeated every day if we tried to bite off this huge chunk. We can’t do everything, but we try to do what we can to make an impact.”

Martin added, “The key is, we can get all excited in America and we can give all this money, but we can’t legislate what goes on in Africa. What has to happen is, the people in Asia have to realize where the ivory’s coming from. Right now, they’re in denial. It’s a work in progress, but I am hearing that word is getting out in China that you should be embarrassed for using ivory.”

“China thinks ivory is prestigious and that’s what’s driving the demand,” said Duncan. “We just need to create enough of a social movement, enough chatter, to say otherwise. It’s all about engagement, to get people to start talking.”

Duncan continued, “This is not the charity initiative of the moment so we feel good about ourselves when we go home. It’s something that we believe in, which speaks a lot about Martin Guitar. We all get caught up in our day-to-day. It’s a nice reminder that there’s a big world out there; it’s not just about hawking your product and reaching your sales goals. This is something that everyone can really rally behind. We need people out there preaching the good word that we have to save these amazing creatures.”

To learn more about how you can help Martin Guitar and The Nature Conservancy save elephants, click here.