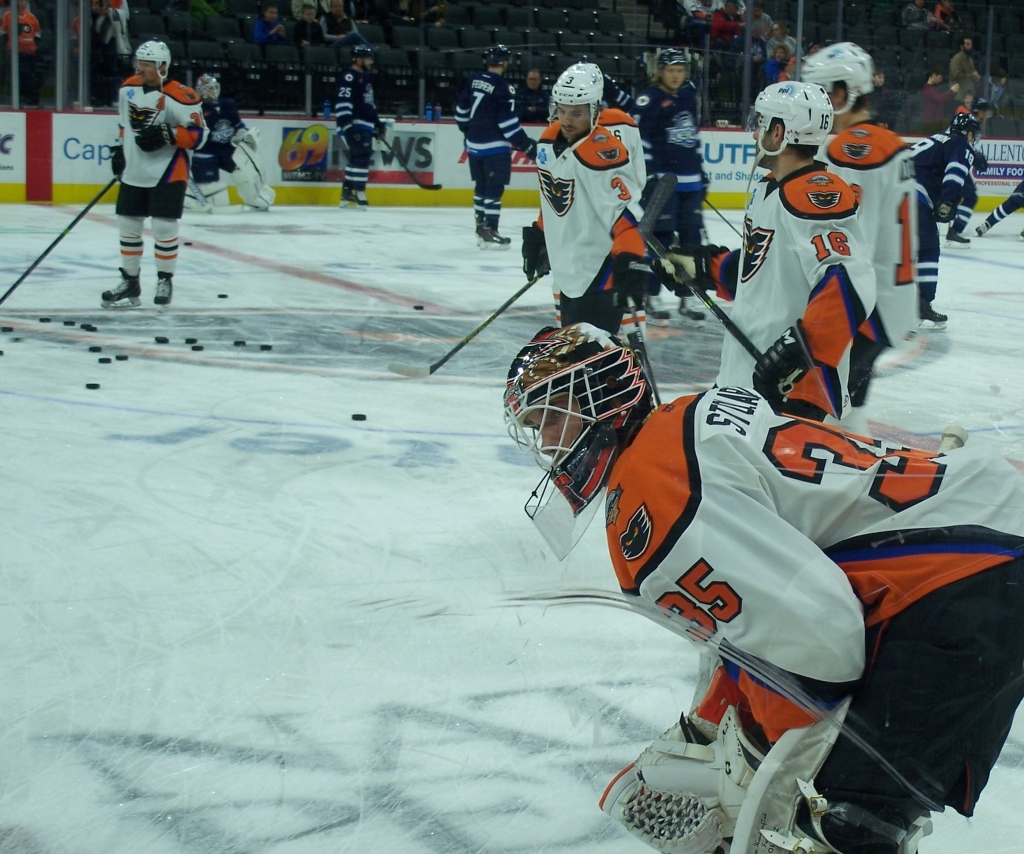 Rookie goaltender Anthony Stolarz picked up his first career win at the pro-level with a 36-save shutout on Friday night vs. Worcester.

After a disappointing road trip saw the Lehigh Valley Phantoms slip in the standings, a five-game home stand is just what the doctor ordered.

The Phantoms have made the PPL Center a tough place for opponents to play in, as evidenced last week. The Phantoms are 4-1-2-0 on home ice this season, including 3-0-1 in their recent stretch of home games. The recent points in the standings have the Phantoms sitting in third place in the East Division, two points out of second place behind rival Hershey.

The Phantoms conclude the five-game home stand Wednesday night when they host the Springfield Falcons.

With rookie forward Scott Laughton recalled to the NHL with Philadelphia, the Phantoms have seen a new name at the top line center position.

Blair Jones was re-assigned to Lehigh Valley from the Flyers to make room for Laughton and has made an immediate impact at the AHL level, starting in his Phantoms season debut on Wednesday night against rival Hershey Bears. Jones set up the Phantoms first goal before tallying the game-winning goal in the shootout to start the week on a positive note for the home team.

Jones was back at it Friday night, tallying assists on both of the Phantoms first two goals in a 4-0 shutout of the Worcester Sharks but it was rookie goaltender Anthony Stolarz stealing the show, picking up his first pro win and first pro shutout, a 36-save performance.

“It was exciting to have my first home start,” Stolarz said, noting his parents and family were in attendance adding to the special night. “Going in, all I wanted was a win, but to get the shutout was the cherry on top.”

Stolarz was especially impressive in the final two minutes as the Phantoms got into a bit of penalty trouble – a resurfacing problem. Luckily for the Phantoms, with the score 4-0 late in the game, the penalties didn’t come back to haunt them. For Stolarz, he earned the shutout win in those final two minutes, making several post-to-post saves on the five-on-three penalty kill to preserve the shutout and his first career win at the AHL level.

Untimely penalties stymied the Phantoms the next night against the St. John’s IceCaps as the Phantoms couldn’t break a 1-1 tie in the third period despite outshooting the IceCaps 10-2 in the third. It seemed every time the Phantoms started to gain momentum and offensive pressure, a penalty would send them back to playing defense.

The Phantoms earned a point in the overtime loss to the IceCaps, but Gordon didn’t seem too impressed after the game.

“We took five out of six points on the week so I don’t want to be a downer here on a Saturday night but for the most part we are seeing the same things happen over and over again,” Gordon said. “The games we are losing, we are losing because we are sort of giving games away. We have to learn how to close these games out and we didn’t do it, we haven’t done it a few times now.”