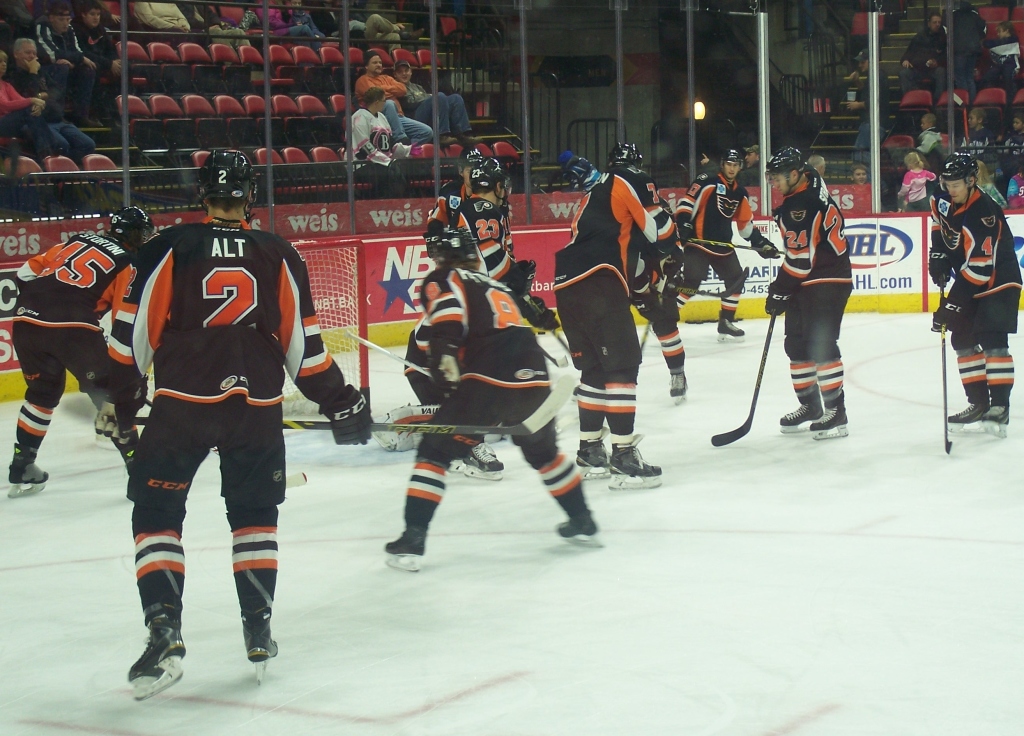 The Lehigh Valley Phantoms (11-10-3-1) are providing fans at PPL Center with plenty of exciting finishes this season, a trend that continued this weekend starting on Saturday night against rival Wilkes-Barre/Scranton Penguins.

After a 3-1 loss in Binghamton on Friday night, the Phantoms took a 1-0 lead over the Penguins on Saturday just 1:15 into the contest. They held the one-goal lead until the Penguins tied things up with 2:08 left to play in the third, forcing the 6th overtime game in just 12 home games this season for the Phantoms.

The seven-minute overtime period didn’t provide a game-deciding goal, but there were several scoring chances for each team – especially by the Penguins in the waning moments of the extra session. Credit some key stops from Phantoms’ rookie goaltender Anthony Stolarz to get the home team to the shootout.

It was a shootout for the second straight home game for the Phantoms, where goals from Petr Straka, Taylor Leier and a patient Nick Cousins were enough to push the Phantoms past the Penguins for the win. Cousins’ shootout goal was particularly impressive, as on his attempt he slowed it down to a near stop before finishing off a forehand to backhand move to tap it into what was basically an empty net.

“They got their money’s worth going into overtime and the shootout,” head coach Terry Murray said after the game. “We make it exciting, but you’d like to finish it off and get the job done in regulation.”

Rookie goaltender Anthony Stolarz was instrumental in securing the Phantoms shootout win, stopping 44 of the 45 shots he faced in regulation and overtime while also stopping two of four Penguins’ shooters in the shootout.

“To come out tonight, play a full 67-minutes, battle in overtime and not let that late goal affect us I think was huge for us,” Stolarz said after the game. “We’re just going to look to keep this momentum going.”

Overall, the Phantoms are an impressive 7-2-2-1 on home ice at the PPL Center in their inaugural season as an American Hockey League (AHL) franchise in the Lehigh Valley. Nine of the Phantoms’ 12 home games have been decided by one goal, with six of those requiring overtime (three advanced past overtime to a shootout).

Needless to say, since day one – their home opening overtime win over the Adirondack Flames on October 17th – the Phantoms have continued to provide solid entertainment to hockey fans attending their games at the PPL Center. And there have been plenty of fans.

The Phantoms have officially sold out the PPL Center in five of the team’s 12 home games so far this season, but have had crowds over 8,000 fans eight times. Saturday’s crowd of 8,687 was the largest crowd to date in franchise history.

The Phantoms finished their second consecutive three-game weekend on Sunday with an overtime loss to the Albany Devils at Boardwalk Hall in Atlantic City. In a reversal of Saturday night’s contest, it was the Phantoms trailing 1-0 for much of the game before Leier jump-started the Phantoms offense in the third period, tying the game with his team-leading eighth goal of the season. The flood gates opened in the final frame, as the Phantoms and Devils combined for five goals in a span of just over seven minutes to send a 3-3 game to overtime. The Devils prevailed in the extra session, but the Phantoms still earned a point in the standings for a game which they trailed for most of the night.

The Phantoms again earned three of a possible six points over the weekend and with a Wednesday night rematch on home ice against Binghamton approaching, the Phantoms will look to climb back up the standings with a win over another East Division opponent.