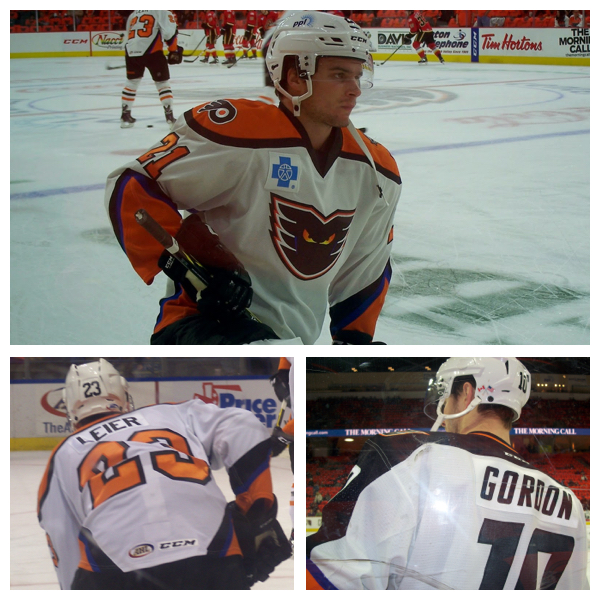 The Phantoms top line from the beginning of the season – Scott Laughton (top), Taylor Leier (left) and Andrew Gordon (right) – has been re-assembled with the return of Laughton from the Philadelphia Flyers (NHL).

The Lehigh Valley Phantoms received good news Saturday afternoon when forward Scott Laughton was re-assigned from Philadelphia, and although the snow kept Laughton from making it to Wilkes-Barre for Saturday night’s game he was a difference maker Sunday in the Phantoms’ 5-4 overtime win over Springfield – re-united on the top line with teammates Taylor Leier and Andrew Gordon.

“They had great chemistry right from the beginning and I’m hoping they can find that immediately,” Phantoms head coach Terry Murray said on his decision to re-unite the top line from the start of the season.

It didn’t take long for Laughton to be noticeable on the ice Sunday in Springfield – his first game back in the AHL since November 15th. After a penalty-filled start to the game saw the Phantoms on the penalty kill twice in the first five minutes of play, Laughton and his line went to work on what was his first or second shift of the game together with the newly re-united top line.

Laughton and Leier worked together in the offensive zone to create a turnover on a fore-check seven minutes into the first period, with Laughton nudging a loose puck into the slot that Leier put into the top shelf to open the scoring for a second straight game.

“I don’t feel like we really skipped a beat,” Leier said of re-gaining his chemistry with Laughton and scoring a goal on his 21st birthday. “We both have speed and Gordon is really good with us too. We’re happy with that line.”

“We room together so we’re pretty tight,” Laughton said of his linemate and friend. “It was cool for [Leier] to score [on his birthday] and for us to get on the board early. It kind of helped my confidence early on and got my feet moving.”

The chemistry between the two rookie forwards – Laughton and Leier – was starting to form well before the regular season started and the two were paired on a line together with Gordon, according to Leier.

“We lived together in the summer and trained in Philadelphia together, then we played on the same line in rookie camp, main camp, all the exhibition games with the Flyers,” Leier said of his time with Laughton before the start of the season. “We were on the same line the whole time he was here. We really got to know each other pretty well.”

For Laughton, the re-assignment to the American Hockey League (AHL) from the NHL didn’t come because of poor play but from the lack of ice time and opportunity to play big minutes in key situations. While in Lehigh Valley, Laughton will have plenty of ice time – including work on both the power play and penalty kill.

“It’s tough coming from a league like that where I wasn’t producing a lot offensively,” Laughton said Sunday about being re-assigned from Philadelphia. “It was good to get in all situations here and play a lot.”

As for what Laughton is looking to accomplish while back in the AHL, it’s pretty basic.

“Simplify my game and take it to the next level,” Laughton said. “I’m still 20 years old and still developing as a player and as a pro so hopefully I can continue to push the pace here and try to get back up there as soon as possible.”

The arrival of Laughton, along with the return of defenseman Mark Alt from a broken hand that caused him to miss 17 games, has given the Phantoms a much-needed boost in depth on the roster. With back-to-back road wins to end last week the Phantoms find themselves just six points out of the playoffs, behind the Providence Bruins for 8th place in the Eastern Conference with the next six of seven games at home – including a match-up against the Bruins on Friday night after a Wednesday night face-off against Binghamton.

“We have to play like we play on the road at home,” Leier said, as the Phantoms have lost their last four games at the PPL Center. “We have to play simple, not over-complicate things out there and we’ll be okay.”