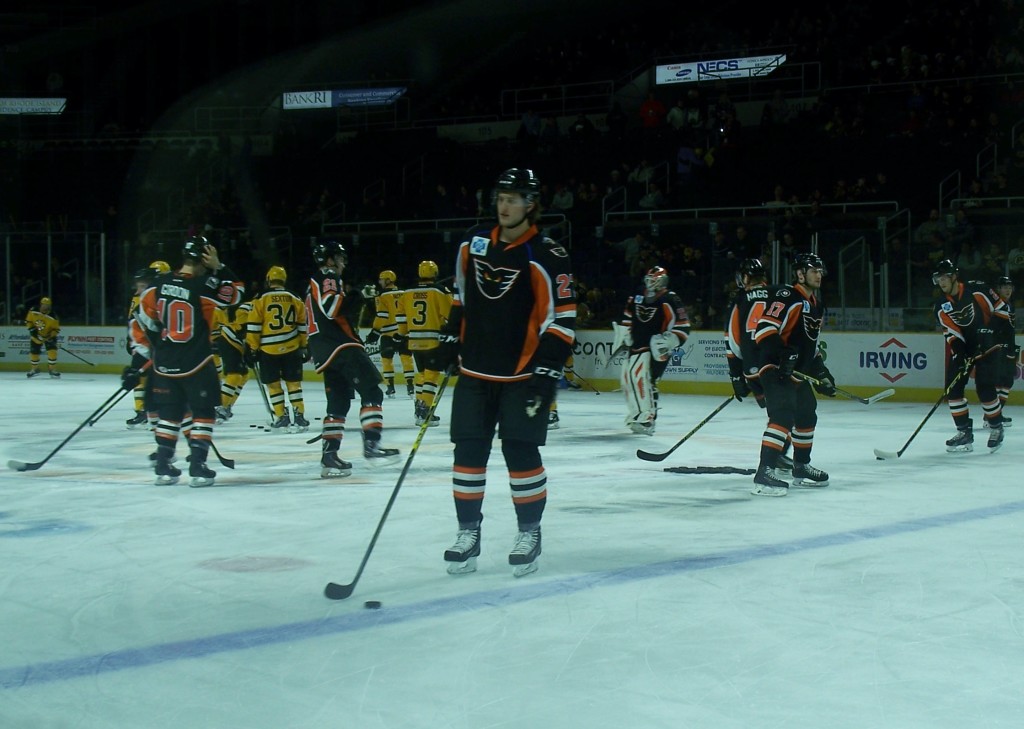 Defenseman Adam Comrie (#27, middle) is in the midst of a four-game points scoring streak with three goals and three assists in his last four games.

The Lehigh Valley Phantoms entered the start of their five-game road trip in Toronto last week nine points out of the playoffs with 19 games remaining on their regular season schedule.

After a 4-3 win Wednesday night, the Phantoms returned to the United States for games Friday night in Providence, RI and Saturday night in Bridgeport, CT, where thrilling back-to-back comeback wins have Lehigh Valley still alive in the playoff picture – potentially just two points out of the playoffs with three games in hand and an eight-point deficit to make up on the current 8th place team in the AHL’s Eastern Conference.

The three wins puts the team 3-0 in their season-high five-game road trip, which sees the Phantoms return home for a week of practice before returning to Connecticut Friday night to take on the Hartford Wolf Pack and traveling up to Worcester, Mass., for a Saturday night face-off against the Worcester Sharks – two teams currently ahead of the Phantoms in the standings.

On Friday night in Providence it was another flare for the dramatics for the Phantoms, who tied the game at 1-1 with 1.1 seconds left in the first period on an Adam Comrie slap shot goal before riding out the tied score into the shootout.

“I knew there wasn’t much time left, so I just wanted to settle it down as quickly as I could and get it off,” Comrie said of his game-tying goal in the final seconds of the period Friday night. “I saw a hole, [Zack] Stortini did a great job screening the goalie in front and gave me an opportunity to pick a corner.”

In the shootout, Scott Laughton scored the lone goal in the third round and the PBruins’ final attempt clanked off the post and out to secure the two points.

“He made a little fake on me and I bit a little,” goaltender Rob Zepp said on the PBruins’ third round shootout attempt. “I just tried to extend my leg and at the last second timing to kick my foot up just to make him think a little bit more like he didn’t have the open net. Maybe it made him force it. Fortunately for us, he hits the post and we win.”

Saturday in Bridgeport, it was Comrie again with a big shot from the point to turn the tides for the Phantoms, drawing even from an early 2-0 1st period deficit 2:21 into the third period before scoring on an odd-man rush just over four minutes later to win their third straight game – their first 3-game win streak since a pair of weekend road trips to Norfolk and St. John’s in early January produced four straight victories.

“Road trips are fun for the boys,” Comrie said of the road victories on the weekend, adding, “We spend a ton of time together. I think [Robert] Hagg was saying that we spent about 21 hours on the bus this road trip so far. On a road trip where you’re just bussing everywhere from one city to the next, definitely a lot of team bonding and it’s a lot of fun for everyone.”

Comrie echoed the sentiment around the locker room that the time is now to make a push for the postseason, and the team is dialed in heading down the stretch.

“I think this road swing here that we have is definitely bringing us a lot of momentum. I think we are getting it in our heads now that we have the opportunity to get a playoff spot and we have the capability of doing it this year. It’s pretty fun actually coming up into the playoff time and trying to get a spot. We need to do the little things – being heavy on players, holding each other accountable, working hard for each other and not letting anything get in the way of winning a game.”