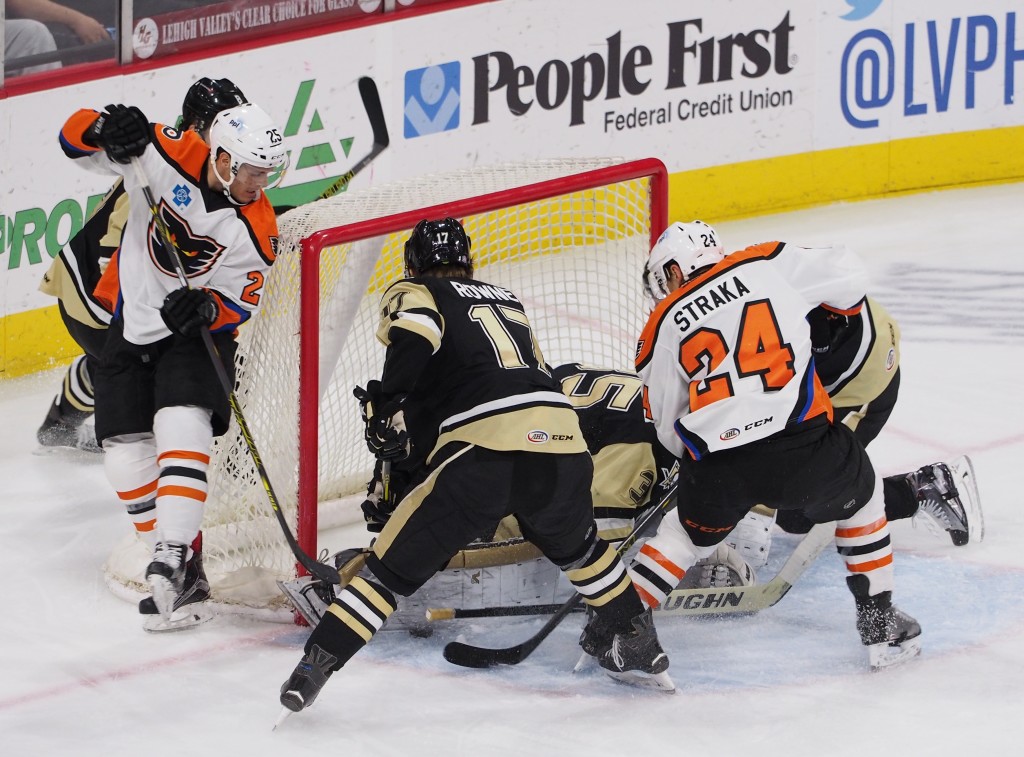 Nick Cousins (left) and Petr Straka (right) battle in front of the Penguins’ net during December 16th’s game against Wilkes-Barre/Scranton. The Phantoms return home this Friday to host their rival.  -photo via Nina Weiss

After a successful five-game road trip saw the Lehigh Valley Phantoms (17-16-2-1) pick up eight out of a possible ten points in the standings, including three wins and at least a point in each of the five games away from the PPL Center (3-0-2), the team is above the .500 mark record-wise for the first time all season.

“It’s just nice to be over .500,” goaltender Jason LaBarbera said after Sunday’s win in Portland. “It was kind of the barrier for the last few months and we couldn’t get over the hump. This team doesn’t show a lot of emotion but I think the guys are pretty happy right now.”

The Phantoms are arguably playing their best hockey of the season right now, with the success of the last five games moving them towards the post-season conversation as the 2015-16 American Hockey League (AHL) season approaches the midway point. Heading into this week’s games, the Phantoms sit in fifth place in the Atlantic Division just four points out of the fourth and final playoff spot in the division.

“It’s not one thing, it’s a lot of things,” head coach Scott Gordon explained of the success on the penalty kill. “From our fore-checking game, our in-zone positioning of the defensemen and the position of our sticks, it’s just a lot of little things that add up to one big thing. As a result, we have much more consistency and on top of that the goalies have been great.”

One of those aforementioned goaltenders, veteran Jason LaBarbera, is having a bounce back performance since the Phantoms returned from the holiday break. LaBarbera finished the team’s five-game road trip with a perfect 3-0 record, stopping 99 of the 101 shots he faced in those three games (.980 save percentage) and earning both his and the team’s first shutout victory of the season with a 35-save shutout over rival Wilkes-Barre/Scranton back on December 27th.

“Especially for [LaBarbera], what he went through with his injury and trying to fight through it. It was good for him to take the time off and for Stolarz to step in and play as well as he did was huge for us,” Gordon said about the team’s goaltenders. “It’s great that we have them both.”

It’s also no coincidence that the penalty killing unit started to improve drastically as the team began to get healthier. Forward Cole Bardreau returned to action on December 11th after missing just over a month’s worth of games and immediately impacted in the special teams play.

Lehigh Valley returns to the PPL Center this weekend to kick off a busy three games in three nights stretch starting Friday night at home against rival Wilkes-Barre/Scranton before taking an overnight bus ride after the game to Albany, New York, for a 5:00 p.m. face-off against the Devils. Back to back games against two of the top three teams in the Eastern Conference will be a benchmark for the Phantoms to see where they stack up against some of the conference’s best competition.

The Phantoms conclude the weekend with a home matchup against the Binghamton Senators Sunday on Star Wars Night at the PPL Center. The BSens have had the Phantoms’ number this season, as Lehigh Valley is winless in three games (0-2-1) against Binghamton on the season.