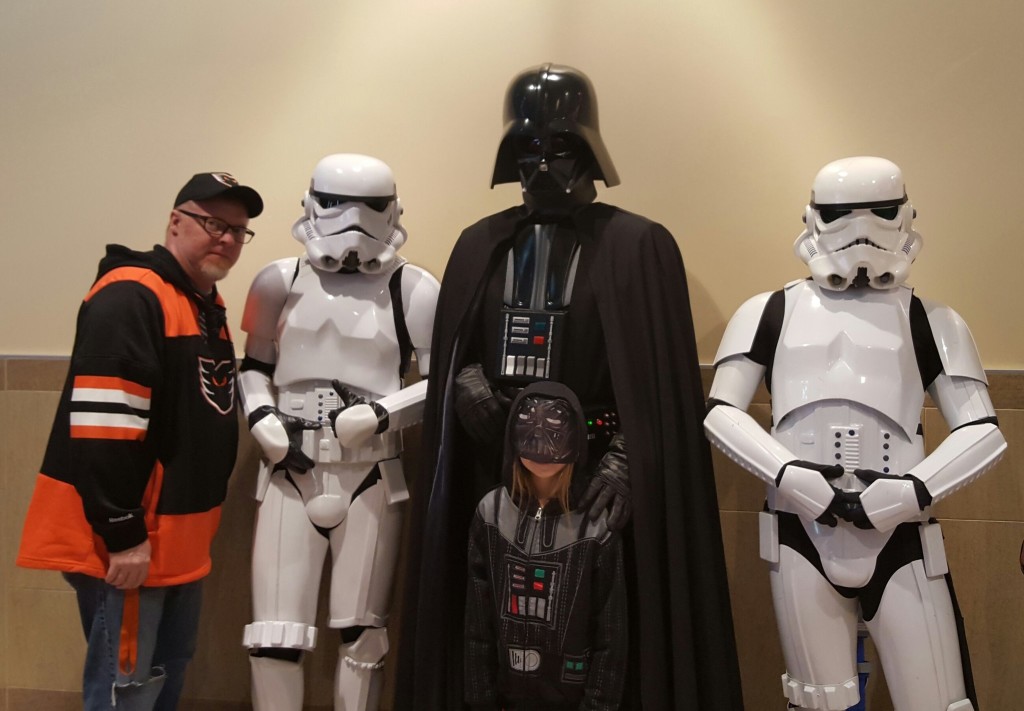 Phantoms fans Bob Keich and his daughter Maya get their picture taken with Darth Vader and the Stormtroopers on Star Wars Night at the PPL Center Sunday.

After a successful five-game road trip saw the Lehigh Valley Phantoms pick up eight out of a possible ten points in the standings, the team appeared to be turning the corner and hoping to continue to build off their recent success. Instead, despite out-playing their opponents for much of the weekend, the Phantoms dropped all three games last week and are back to the drawing board at practice this week.

“I don’t think there’s any doubt that 5-on-5 we weren’t in our [defensive] zone,” head coach Scott Gordon said after Sunday’s 2-1 loss to Binghamton. “I’d be hard pressed to go back and watch the game and find many breakdowns. We came out of the zone with great breakouts and defended well. That’s obviously a positive sign for us.”

The team is staying positive despite going winless over the weekend, hoping that if they stick to the way they have been playing that the bounces will start to go their way.

They certainly didn’t go their way on Sunday. With the game tied at 1-1 early in the third period after a strong move by Nick Cousins got the Phantoms on the board, Binghamton came right back and re-took the lead on a bit of a busted play.

“It was a bouncing puck. It goes off his stick, off the shaft and kind of goes over my glove,” goaltender Anthony Stolarz explained of Binghamton’s game winning goal in the third period. “It’s just the way it goes sometimes, you can’t get too frustrated.”

The Phantoms got a boost on defense Sunday with the return of defenseman Andrew MacDonald, but the power play went 0-for-5 in Sunday’s loss – something that both MacDonald and Cousins agreed needs to be better.

The goals aren’t coming from a lack of chances. The Phantoms simply need to bear down and finish more of the quality chances they are generating.

“Those are the types of breaks we aren’t getting. Even though we are playing well, it’s a battle to get a goal right now,” the Phantoms’ head coach said.

Before this past weekend’s games, both Stolarz and Cousins were named to the playing roster for the 2016 AHL All-Star Classic in Syracuse on January 31st – February 1st.

The Lehigh Valley Phantoms might have dropped their third game of the weekend on Sunday to the Binghamton Senators, but they did so in front of a sellout crowd of 8,440 fans who attended PPL Center on Star Wars Night. It marked the third home game in a row the Phantoms recorded a sellout crowd and their eighth in 19 home games so far this season. The Phantoms’ average home crowd of 8,043 ranks fourth highest in the entire American Hockey League (AHL) in terms of attendance.

The Phantoms look to get back to their winning ways with another three-game weekend approaching, starting Friday night at home against their Atlantic Division rival Hershey Bears. Lehigh Valley remains at the PPL Center for a Saturday night showdown against the Hartford Wolf Pack before finishing the weekend in Bridgeport, Connecticut Sunday at the Webster Bank Arena against the Bridgeport Sound Tigers.

Follow Lehigh Valley Phantoms hockey all weekend long with exclusive live coverage of the team both at home and on the road by following Tony on Twitter -> @TonyAndrock.