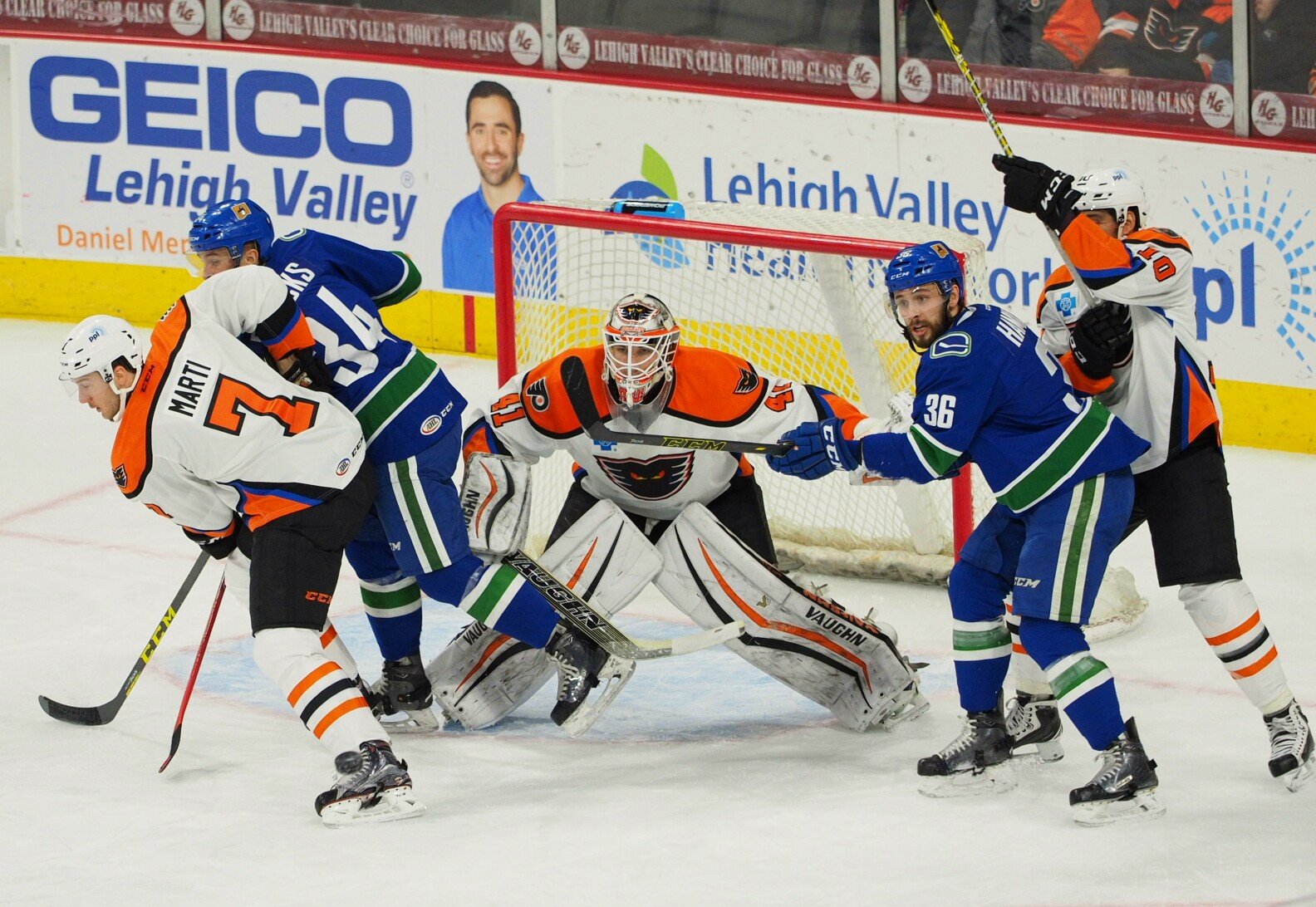 With five straight wins heading into the All-Star break, the Lehigh Valley Phantoms were in good shape. They were closing the gap and heating up the playoff race in the Atlantic Division. After back-to-back losses over the weekend made it 1-4 since returning from the break, the Phantoms are right back where they were – down, but not out.

The Phantoms remain in seventh place in the division but are fading fast from the postseason conversation. They trail both fourth place Providence and fifth place Bridgeport by nine points entering this week’s games. Both have played fewer games than Lehigh Valley and not only are they ahead of the Phantoms, they are playing arguably their best hockey of the season. Providence enters the week without a regulation loss in their last 16 games, while Bridgeport is 8-0-1 in their last nine contests.

Still, the Phantoms haven’t called it a season just yet despite losing forward Nick Cousins and now defenseman Andrew MacDonald to Philadelphia. The remaining guys in the locker room understand the dire situation they are in.

“Absolutely, I think so,” Alt said when asked if the Phantoms are still capable of making a run toward the postseason. “We have the talent in here. [Saturday] we didn’t work, but we can work and if we get back to doing that we will be just fine.”

Andrew MacDonald Back With The Flyers

The Philadelphia Flyers recalled defenseman Andrew MacDonald from the Lehigh Valley Phantoms just a few hours before the Phantoms’ home meeting with the Utica Comets on Saturday night. The recall came after Flyers’ defenseman Michael Del Zotto was injured earlier in that afternoon’s game against the New Jersey Devils and is expected to be out long term.

MacDonald was the Phantoms’ active leading scorer upon the time of his recall, and was arguably playing his best hockey of the season. He was in the midst of an AHL-season high nine-game points scoring streak (0G-14A) and led all AHL defensemen with 31 assists while being second among AHL defensemen in power play assists.

“He’s a top-notch guy, I knew that coming into the year having him when I was with the Islanders,” Phantoms’ head coach Scott Gordon said after Friday’s 3-1 loss to Portland. “He’s a great leader, and it doesn’t surprise me what he has done.”

While with Lehigh Valley, it quickly became evident that MacDonald was not an AHL player. He was easily the best defenseman on the team and played a pivotal role in the Phantoms’ success on the ice and off the ice mentoring the younger prospects on the team.

MacDonald’s departure leaves a big hole on the Phantoms’ back end – one that will need to be filled if Lehigh Valley hopes to turn things around and make a push towards postseason contention.

“He’s been a huge part of our team this year,” Alt said of MacDonald. “He’s a leader on this team. It was tough losing him right before the game like that, but that’s the nature of this league. It happens all the time. You have to be ready for it and guys have to fill in.”

The Phantoms begin a crucial three-game weekend by concluding their five-game home stand starting Friday at home against the Springfield Falcons, before hosting the Bridgeport Sound Tigers Saturday night. Both games are scheduled for 7:05 p.m. ET. Lehigh Valley concludes the weekend with a 5:00 p.m. ET face-off Sunday in Springfield in a rematch of Friday night’s contest at the PPL Center.