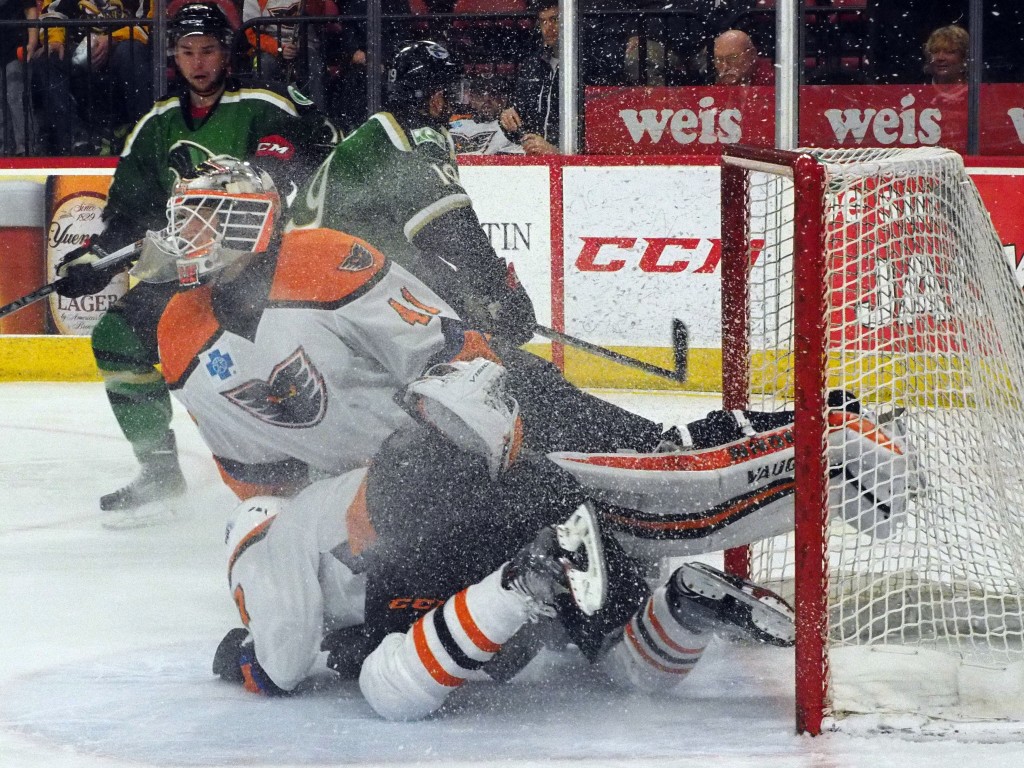 It’s now or never for the Phantoms if they want to play past mid-April this season. Photo: Nina Weiss/The Home News

Frustrating Weekend Has Phantoms On The Brink

After back-to-back losses last weekend pushed the Lehigh Valley Phantoms to nine points away from the AHL Eastern Conference’s final playoff position, the writing is on the wall. Either string together a stretch of wins on this current five-game road trip to get the ball rolling in the right direction, or be ready to call April 17th’s game at home against the Syracuse Crunch the last game of the season.

Despite putting up 36 shots on the Wilkes-Barre/Scranton Penguins Friday night and following that up with 35 shots the next night in Binghamton against the Senators, the Phantoms had just one goal – a 2nd period tally from Petr Straka – to show for it in a pair of losses that head coach Scott Gordon says has simply dug the team into a hole.

“I feel like we have lost so many of those games where we were the much better team,” Straka said after the Phantoms’ latest setback Saturday in a 3-1 loss to Binghamton. “We either didn’t get the bounces or weren’t hard enough around the net and despite out-shooting and out-chancing the opponents, we just lost those games. That’s the difference between us and the teams that are in the playoff positions right now.”

Playing well and not getting the results simply isn’t cutting it for the Phantoms right now, and the players in the locker room will be the first to agree. Still with just 16 games left on the regular season schedule, it’s a tall task of a team to make up nine points in the Atlantic Division standings.

“It’s big time frustration,” veteran forward Jay Rosehill said, adding, “We have had good starts to the last couple of games, but pucks aren’t going into the net. We need to stay on the formula that has gotten us those good periods. It just seems that few mistakes here and there are ending up in the back of our net and it’s costing us.”

Straka said he couldn’t speak for the rest of his teammates, but that it’s pretty much now or never for Lehigh Valley if they want to contend for postseason position.

“I’ve been going into the games recently as if it’s do or die,” Straka explained. “We obviously didn’t help ourselves the weekend. The best case for us would be to get 16 wins, or whatever is left. We have said it many times that if we keep playing like this we are going to win games, so hopefully we are going to turn it around and get a streak going. At least give those teams some pressure. We’ll keep pushing.”

There were no shortages of achievements over the weekend, as former Phantoms and Philadelphia Flyers goaltender Michael Leighton broke the AHL’s all-time shutout record with his 46th career regular season shutout in the Rockford IceHogs’ 5-0 blanking of the Lake Erie Monsters Saturday night. The record was broken after nearly 59 years when legendary netminder Johnny Bower set the mark back in March 10th, 1957 after an 11 year career with the Cleveland Barons and Providence Reds.

Leighton recorded seven of those 46 AHL shutouts while a member of the Adirondack Phantoms from 2010-13. He also appeared in 32 NHL games with the Flyers, not including the 8-3 record in the 2010 Stanley Cup Playoffs with three shutouts that marked what was thought to be an impossible comeback from down three games to none against the Boston Bruins and a trip to the Finals against the Chicago Blackhawks.

Wilkes-Barre/Scranton Penguins captain Tom Kostopoulos became just the fourth person in hockey history to appear in 600 regular season games in both the AHL and NHL on Sunday when Kostopulos’ Penguins hosted the Hershey Bears.

Kostopoulos is the Penguins’ all-time leader in games played, points, goals, assists, points and games played and joins current Florida Panthers forward Shawn Thornton, as well as Dave Creighton and AHL Hall of Famer Jim Morrison as the only members of the 600/600 club. The AHL Pens’ captain made his 600th AHL game count, tallying three assists in the Pens’ 5-4 win over the Bears Sunday evening.

The Lehigh Valley Phantoms (27-28-2-3) continue on in their five-game road swing Wednesday night at the Mohegan Sun Arena at Casey Plaza when they take on rival Wilkes-Barre/Scranton at 7:05 p.m. ET. The Phantoms then travel to Connecticut on Saturday for a 3:00 p.m. afternoon tilt at the XL Center against the Hartford Wolf Pack

You can follow the Lehigh Valley Phantoms while they’re on the road with exclusive live coverage, breaking news, in-game updates and much more by following Tony on Twitter -> @TonyAndrock and by visiting his daily online coverage at Highland Park Hockey.