Mr. Jack R. Santo was reared in Nazareth. His family has a long history in the cement industry. Many relatives worked at the Penn Dixie Dement Co. Jack graduated from Nazareth High School in 1973 where he played both baseball and baske 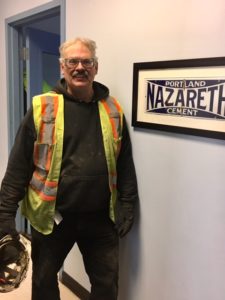 tball. He continues to follow the motto of Tony Relvas, his basketball coach: “Never give up, if you work hard you will benefit.”

After attending Northampton Community College, Jack started his cement career of 43 years at Coplay Cement Co. in Nazareth on May 20, 1975. The plant later became Essroc, and is currently Lehigh Heidelberg.

“I was hired by Mr. Dean Sandbrook who was president of Coplay. Dean was highly respected in the industry. My first job was a conveyer tender when the plant had eight kilns. Today we have one.”

“In 1978 there was a massive layoff when Coplay constructed a new, ultra modern facility. I then worked as a route driver for Mrs. Smith’s Pies until 1980 when I was recalled to work in the new plant. I was back as a laborer, truck driver and equipment operator and later was promoted to the maintenance gang. Old timers who shared skills with me were Charlie Corroll, John Rundle, George Reenock, Dan Creyer and Dan Mason.”

Mr. Santo said, “We continue to update the plant to stay competitive. We have two outages each year to service each section of the plant. The work is challenging for there are always new additions to service.”

“Safety is stressed, safety is 100% better than it was 40 years ago. Each day we have a brief safety meeting before each shift, our Safety Director is Brad Davis.”

The workers are represented by the Teamster’s Union, the local president is Mr. Cliff Rose.

Mr. Santo said, “I enjoy working with my co-workers and have spent countless hours and days working with them. The cement industry has been good to me and my family by providing us with a good living.”

Jack has been married to the former Diane Purdy of Wilson Borough for 42 years. They are proud of children Jason, Josh, Justin, Jeremiah, Danielle and Desiree, and seven grandchildren. He is an avid Phillies and Philadelphia and Nazareth Eagles fan.

The friendly family resides in Wilson Borough. Each day Mr. Santo faithfully continues the cement heritage of his family.

We hope Jack and all our friends at Lehigh Heidelberg have a safe and prosperous year.