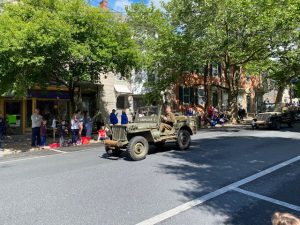 After a brief hiatus, VFW 4366 and American Legion Post 415 held their annual Memorial Day parade to honor the men and women who served and died during America’s wars at home and abroad. Nazareth’s downtown was a sea of red, white, and blue as families came out to celebrate their hometown heroes.

The Nazareth Area Blue Eagle Marching Band played patriotic tunes along the route, earning applause from the crowd and the veterans alike. 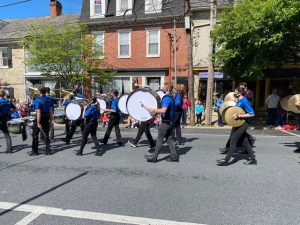 The parade concluded at Council Chambers where members of the Legion and VFW were there to give remarks.

“For all who gave their yesterdays, we thank you today,” he said. “They were ordinary people who responded in extraordinary ways.”

“Nothing can replace the hole left behind by a fellow service member,” he added. “While you are having your picnic…just take a few moments to remember those who gave the ultimate sacrifice.” 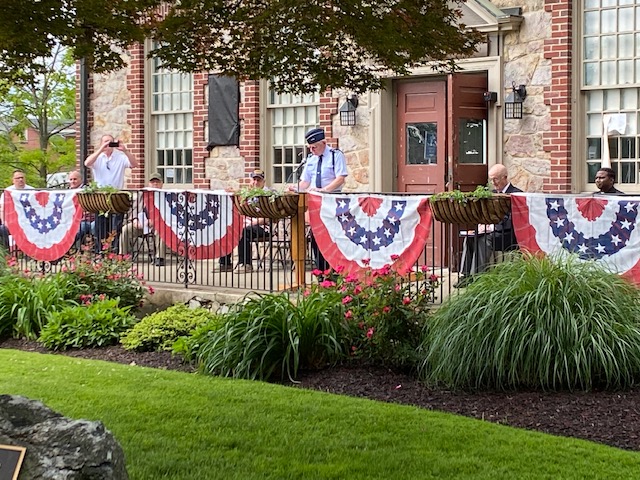 A plaque was unveiled outside Council Chambers memorializing Private First Class Craig Gordon Klotz, Corporal William Edward Huff, and Private First Class Ray Glenwood Hawk. All members of Nazareth’s Class of 1967, they were killed while on active duty in Vietnam. 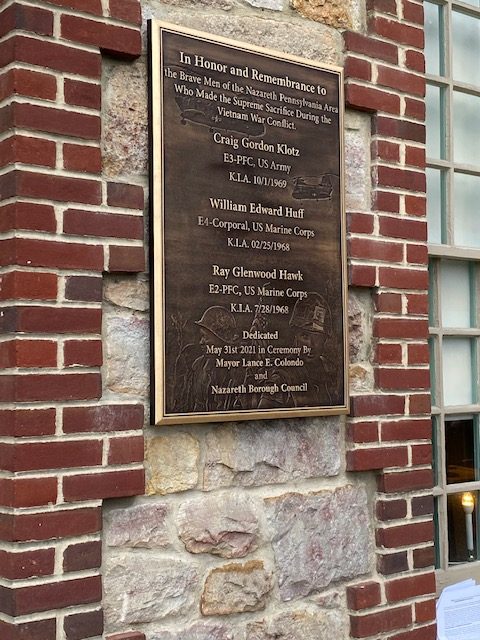 “Soldiers returning home [from Vietnam] were not treated with the respect they deserved.”

Colondo credited several Nazareth residents, including 1967 graduate Harry Beers, with their determination in erecting this memorial for their classmates.

Family members of the fallen soldiers were present, including Huff’s half-brother Steve Southam. Southam read a letter written by Huff days before he was killed.

“I did not die in vain, but for you,” Huff wrote to his parents. “To be free…and to go to work and school and watch movies and television…I feel good inside.”

Council President Daniel R. Chiavaroli, also a Vietnam veteran, shared his own story. He served a year on an airbase before returning home, where he was dissuaded from talking about his experience.

This memorial, he said, “reminds me of those who returned home…with injuries you cannot  see…it reminds me I am one of the lucky ones.”