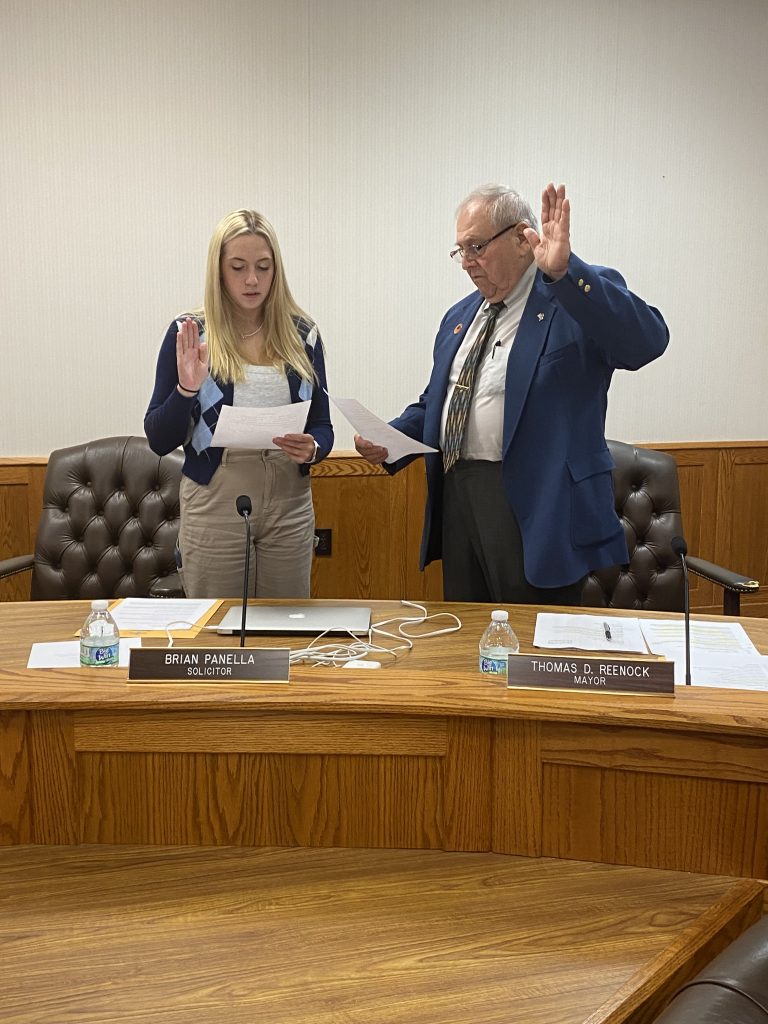 Ryleigh Tillotson, a junior at Northampton Area High School, is looking forward to bringing a fresh perspective to Northampton’s Borough Council. The Third Ward resident was sworn in on Thursday, September 2, as the borough’s junior council member.

“I am glad I can try to make [Northampton] a better place for people my age and older,” said Tillotson.

She has been a borough resident her whole life and the close-knit community has played a pivotal role in who she is today, she told members of council.

Tillotson will be fully involved in council meetings. She can participate in discussions, ask questions, and give reports. However, she will not be able to vote.

“I hope you develop a thick skin,” joked Councilman Anthony Lopsonzski, Sr. He added that he hopes Tillotson can bring back issues important to her fellow students.

“We are like a family,” borough manager LeRoy Brobst told Tillotson. “We argue sometimes but we all get along…It is so nice to have a fresh perspective.”

Tillotson may be very busy sooner rather than later. Council already expressed interest in her helping with a future borough newsletter and with the community garden.

In other news, Brobst and members of council praised public works and first responders for their help during September 1’s flooding. The borough experienced significant flooding along Canal Street, as well as downed trees on Laubach Avenue.

“The response was exceptional,” said Brobst. “Thanks to the police, fire department, public works, and the fire police.”

Brobst added a special thank you to NASD Superintendent Joseph Kovalchik for serving as a traffic monitor to help direct school traffic around Laubach.

“Kudos to everyone who was out there getting all of this done,” said Councilman Kenneth Hall.

“When these things happen, you do not realize how much first responders come into play,” added Councilman Ronald Glassic.

During the September 2 meeting, council also praised the work of Code Inspector Keith Knoblach. Response rate for rental inspections in 2021 has been 96.3%. In addition, 17 charges were brought against a property owner on Dewey Avenue for a rat infestation. The property owner was found guilty on eight of those charges and settled on the remaining nine.

The property is not forgotten and will be monitored regularly, council informed residents.

“A message needed to be sent and [it] was received,” added solicitor Brian Panella.

The next Borough Council meeting will be held on Thursday, September 16 at 7:30 p.m.