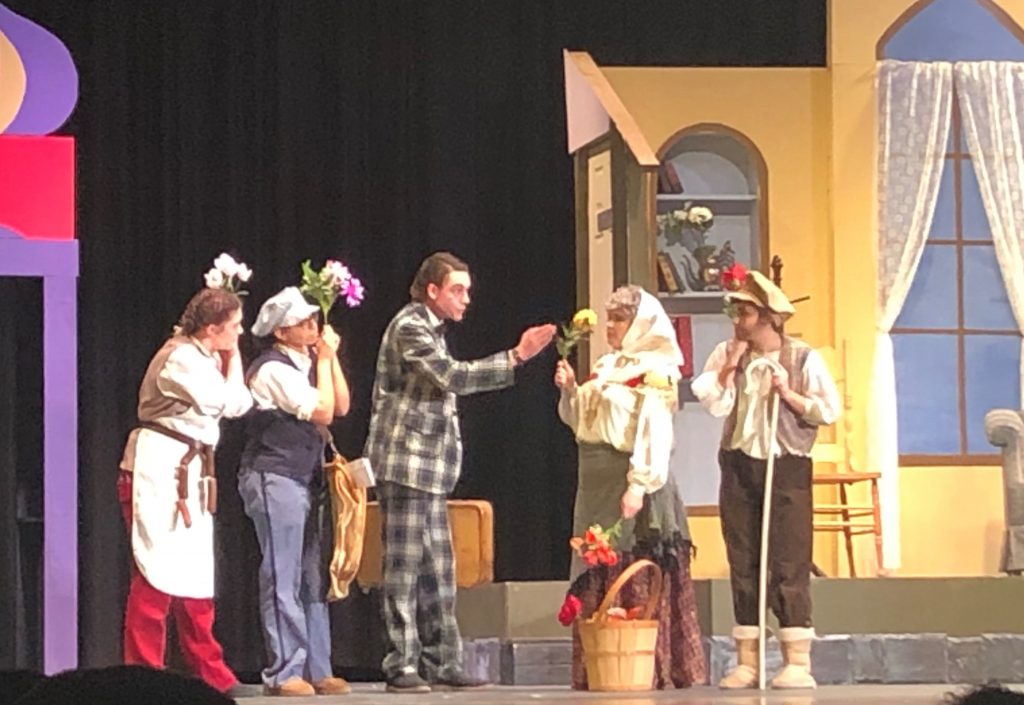 On November 19 and 20, Northampton Area High School’s drama club put on their performance of Neil Simon’s comedy “Fools.” One of Simon’s lesser-known plays, “Fools” tells the story of the remote Ukrainian village of Kulyenchikov, whose residents are ignorant and seem incapable of being taught. The show opens with schoolteacher Leon Tolchinsky (played by Shawn-Tyler Laub) arriving in town after seeing an advertisement seeking a teacher for Sophia Zubritsky (played by Maddy Rex), the daughter of the town doctor. The villagers soon explain to Tolchinsky that their village is under a curse and that unless he is able to teach Sophia within 24 hours of his arrival in town, he will lose his intelligence as well.

Motivated by his newfound love for Sophia, Leon decides he must find a way to break the curse, even if it means being unable to save himself, but discovers after 24 hours that he is still the same. Deciding that the curse only works on those who allow it to, Leon devises a plan to fool the townspeople into believing that the curse has been broken. He learns that the people of Kulyenchikov believe the curse could be broken if Sophia marries a descendant of Vladmir Yousekevitch, who placed the curse on the town after his son’s heart was broken by the Zubritskys’ ancestor, also named Sophia. Leon tells the townspeople that a letter he receives contains news of a long-lost relative, also named Yousekevitch, meaning that the curse would be broken if he married Sophia. Though the details in the letter are made up, Leon and Sophia are married, and the townspeople go on to live happy lives free of the curse.

Also starring in the production were Eliza Doll as Lenya Zubrtisky and Max Euculano as Dr. Zubritsky. The two proved a dynamic duo as parents to the clueless but beautiful Sophia. Comic relief also came from Kulyenchikov’s other villagers and shopkeepers, including Snetsky the absentminded shepherd (Sophia Davidick), Yenchna the flower and fish vendor (Evelyn Raub), Mishkin the postman (Azelia Dos-Santos), and Slovitch the butcher (Annabel Pyne). Will McMahon and Michael Seidick rounded out the cast of colorful characters as Gregor Yousekevitch and the Magistrate, respectively.

Director Gianna Neal was eager to make a return to live theatre with this production, and felt that “something fun and upbeat” would be a good choice for a fresh start after previous productions were cancelled in the wake of COVID-19. Neal did express that she wished she had not lost out on so much time with previous students whose shows were cut short by the pandemic, but praised the cast for their enthusiasm and dedication, which she said made the rehearsal process one of the smoothest she’s seen.

“I think they were just so excited to do a show,” she had said, reflecting a similar sentiment towards the ability to stage live productions again.