If you spend a winter evening walking past 1220 Main St. in Northampton, make sure you take a moment to pause and listen. You may hear the songs of carolers. The engine of a train. The echo of a silversmith. Follow the sounds up 1220’s front steps (a sign on the front porch invites you to take a peek). One glance through the front windows and you’ll be transported to a miniature winter wonderland.

There’s a snow-covered school with children playing outside. A Salvation Army marching band performing. A crackling fire that villagers gather around to keep warm. Warmly lit mansions decorated in garland. A farm with the animals out to graze. A ski lodge and ranger station. A 5&10, a barber, a bank, a café, and a newsstand. A nativity scene. Look closely and you’ll see kittens playing in the snow, a woman selling wreaths, and a horse pulling an ice cart. 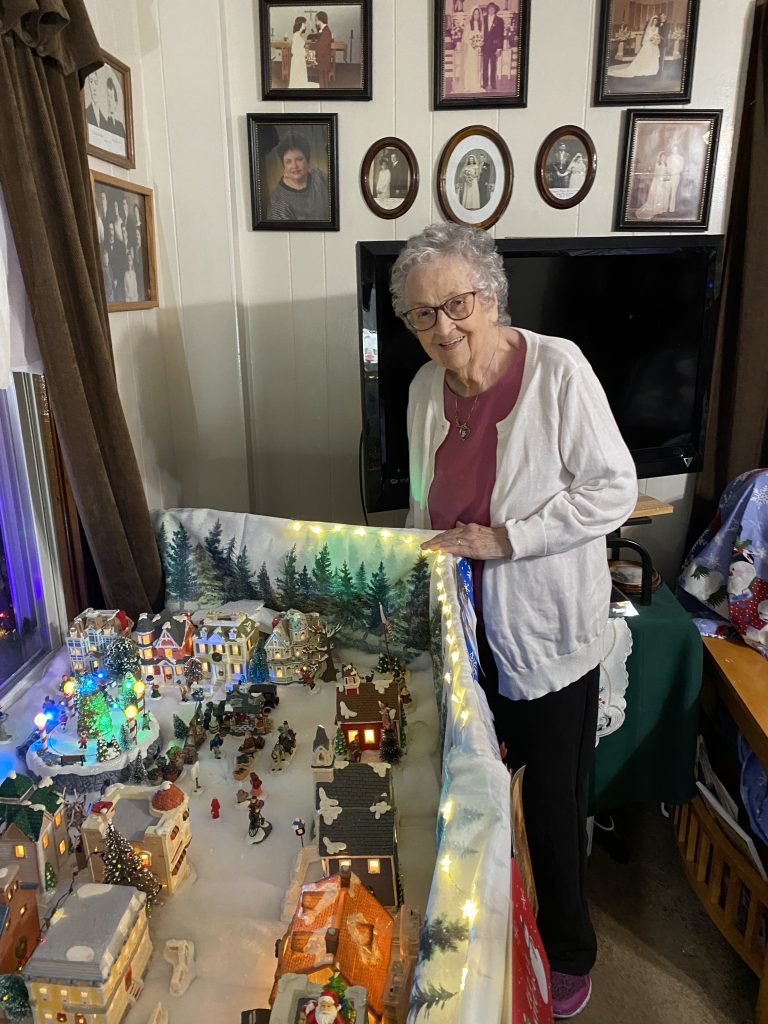 The handpainted Christmas putz on display is the work of Nancy Kumernitsky, 91. She has been painting and displaying ornate Christmas putzes since the 1980s. Children walking down Main Street to get a snack from the nearby convenience store often stop by, eyes wide, as they watch the moving skiers, the twinkling trees, and the dancing skaters. Kumernitsky’s Christmas putz rivals the holiday window display of any department store.

“I love watching the kids,” Kumernitsky says when asked why she continues to put the putz on display every year.

“Their eyes sparkle,” she adds with a smile. She watches from her living room, waving people up who may be too shy to approach from the street. Her daughter, Jean, says the joy of other people is her mother’s greatest joy.

The putz truly is a labor of love. It takes anywhere from one to three weeks to construct the eight-and-a-half-foot-long display. Meanwhile, painting a single building can take hours (this year’s putz has two dozen stores, churches, and school buildings on display). Some of the villagers Kumernitsky painted had their eyes painted on with a cat whisker, as that was the only tool small enough to capture the details.

Kumernitsky’s father started the family’s Christmas putz tradition in the 1930s. When she was in second grade, Kumernitsky says her father fell ill. The owner of Elmer’s Restaurant (now the site of the Uptown Park), he was used to keeping busy. So working on a putz gave him “something to do with his hands,” she says.

The detailed putz her father made mirrored 27th Street in the borough and included a replica of his home and the JS Klippener Farm. From there, a tradition was born.

It wasn’t until the 1980s that Kumernitsky started displaying her own putz. Jean found a few ceramic houses that Kumernitsky began painting.  Every year, they added more buildings until the Kumernitsky family had an entire village. Nancy’s late husband, Frank, helped with the electricity, making the trains run, the skaters twirl, and the lights sparkle.

The putz changes every year, telling a different holiday story. Jean says she and her mother try to display three different “vignettes” for people to enjoy. Some years there has been a moving trolley. Other years, a fountain (which Kumernitsky says, with a laugh, her cat enjoyed drinking from!). One year the Kumernitskys replicated Main Street, complete with the Roxy. Jean says there are “boxes and boxes” in the attic with different buildings, people, and animals.

But every year, there is one building the Kumernitskys make sure they include: Elmer’s Restaurant. Nancy grew up at her father’s restaurant. It was where she worked, where her mother worked when her father went to war, and where she met her future husband. This year, the restaurant sits in the center of the putz, facing Main Street, and glowing brightly as the carolers, children, and skiers enjoy a wintery night. Kumernitsky says it is always her favorite piece.

The putz will remain on display until at least the end of January. Residents walking past, eating at the diner across the street, or just driving through the borough, are invited to stop by the front porch to take a look. The sites and sounds are sure to bring you a smile.